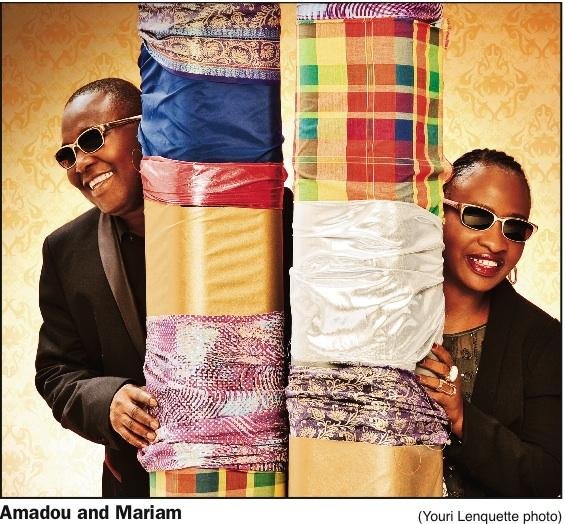 "Welcome to Mali" (Because Music/Nonesuch Records), the highly anticipated, hot, new CD by Amadou & Mariam, was released in the U.S. last week. Three years in the making, the album is a delightful follow up to the couple's critically acclaimed 2005 Grammy nominated breakthrough album, "Dimanche Bamako" ("Sunday in Bamako"), which was enthusiastically embraced worldwide by critics, audiences and fellow artists in Africa, America and Europe.

The excitement about the music of guitarist Amadou Bagayoko and vocalist Mariam Doumbia is fevered by the talent of the duo, as well as their unbridled love for their art. The couple has been making music together since they first met and fell in love 30 years ago at the Institute for Young Blind People in Bamako, the capital of Mali, located in West Africa.

Their abiding love for their craft continues on the moving 15 tracks "Welcome to Mali," which opens with "Sabali," that brilliantly reflects Amadou & Mariam's evolution from their debut album. Produced by Damon Albarn, "who is intimately familiar with the West African blues," "Sabali" is a fusion of the soul and core of Amadou & Mariam's traditional Malian rhythms, to which a hip-hop rhythm and electronic elements have been added, giving the track a wider universal appeal for today's contemporary generation.

The other 14 tracks--a collaboration between Amadou & Mariam and their longtime producer, Antoine Moreau, and Lauren Jais-- are a strong and noteworthy blend of several interesting genres of music delivered by some of the most imaginative musicians of today.

This further assists in breaking down doors to a wider fan base of music lovers. Recorded in Bamako (Mali), Dakar (Senegal), Paris and London, the album's eclectic mix includes the attention-grabbing hip-hop of Keziah Jones and K'Naan, the dynamic Somalian-Canadian artist (who we adore); virtuosic kora playing of Toumani Diabate (another fabulous artist we love); the cool funk of Juan Rozoff; the hot, unique reggae of Tiken Jah Fakoly from the Ivory Coast (who we are really vibing) ;and the fresh indie rock of Mathieu Chedid (who we have to give a shoutout to: "Fantastique,M!" )

The buzz for "Welcome to Mali," which was released in the U.K. last year, is fierce. It made a number of top albums lists and received great reviews, including a five-star review from London's Observer Music Monthly, which called it "the most exciting pop album of 2008."In addition, the review by the British publication also states: "'Welcome to Mali' will be appreciated by millions...as a product of an authentically global pop phenomenon." Likewise, the Sunday Times, the Guardian, Time Out London, the Independent, the Daily Telegraph, and other British media responded with equal enthusiasm.

The elation for "Welcome to Mali" is akin to that of its predecessor, "Dimanche Bamako," which has sold more than 600,000 copies worldwide and earned tremendous critical praise from the New York Times, the Los Angeles Times, the New Yorker, Entertainment Weekly and National Public Radio. It was featured on the Best of 2005 lists of Rolling Stone, SPIN, Blender, Time, Time Out NY, and other media.

In addition to its Grammy nomination, "Dimanche" earned the Album of the Year and Best African Album distinctions at the BBC Radio 3 Awards for World Music (Britain) and was also awarded France's prestigious Victoire de la Musique.

We urge you to pick up the innovative, highly entertaining new CD, "Welcome to Mali." In addition, we also suggest that you check out Amadou & Mariam live in concert. They will headline a North American tour in June before joining the British alternative rock band Coldplay on tour in July. For more information, please visit the Amadou & Mariam website at: www.amadou-mariam.com or Nonesuch Records at www.nonesuch.com.

The Africa Sings!!! series was inspired by the Beninese Grammy winner Angelique Kidjo, the first lady of world beat music and UNICEF good-will ambassador, who said of this musical movement, "I feel we are living a special time in history when people are ready to open their hearts to the beauty of African culture through its musical heritage."