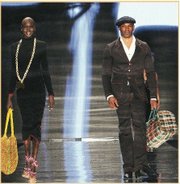 The show started with a film and voiceover of an extraordinary sunrise that was followed by a vivid black-and-white, bold video of Grace Jones imagery. Xuly Bet opened the show. First seen at his premiere in Paris, France, during the late '80s, his show was awesome. Here at the New York shows, his clothes are super chic, honey fresh, functional and voluptuous. For day, Xuly Bet's creative director, Lamine Badian Kouyate, focuses on suits with thin-legged pants or detailed, yet fitted skirts. His colors are electric. There are big, beautiful scarves and fashionable big bags. His black leather, form-fitting dresses are the best. He jumps into fall with a leather jumpsuit. Adding to the excitement in his show were star models such as Alek, Tyson Beckford and Ms. Grace Jones herself. When they all hit the runway, the audience gave them each a standing ovation. Talk about star power, this editor has never experienced such excitement at a fashion show. Xuly Bet's high-fashioned styles were off the hook!

Tiffany Amber, designed by Folake Folarin Coker, draws on more classic shapes. Her look is feminine with a vibrancy of Africa. Her autumn/winter collection is made in heavy shantung silk slips and Irish linen coats. In this rich, timeless collection, she also mixes in traditional Ankara fabrics. Her heady gear was unusually modern, covering the face, which does work for today's working women on cold, winter days in New York, London or Zurich. She also featured top models in her show.

The best thing about the entire show is that Arise showed off beautiful ethnic models from all over the world, including the United States, China, Jamaica, Brazil, Czech Republic, Senegal, Somalia, Sudan, Nigeria, Namibia, Mali, United Kingdom, Ethiopia, South Africa, Tanzania, Russia, India, the Netherlands, and Ukraine. It was a beautiful relief to see so many women and men of color modeling on runways at the Tent. The room and show were electrifying.

Mama Africa, a powerful cultural ambassador and fashion icon of the 1950s, influenced Stone Cherrie's collection, "An Ode to Miriam." The line displayed the designer's values of pride, authenticity and creativity. Using light wools, silks and woven jacquards, the style range embodies the timeless elegance of its cultural muse with an afro-urban twist. Good show!