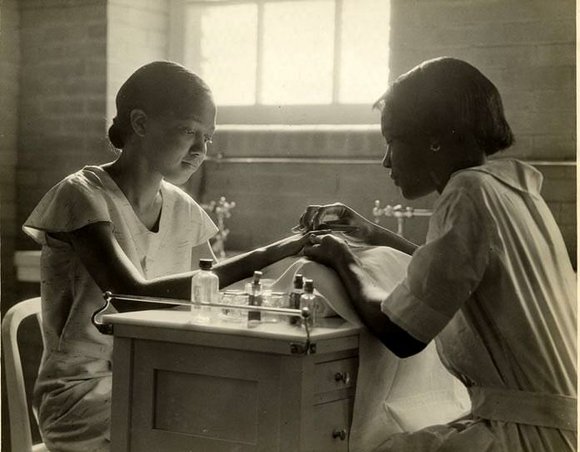 A student gives another student a manicure as part of her trade education in beauty culture. (Lewis Hine photo)

Time was never on the side of the Manual Training and Industrial School for Colored Youth in Bordentown, New Jersey. As a co-ed boarding school for Black high school-aged children in 1886, Bordentown (as it was called) was an anomaly north of the Mason-Dixon line. Though many Black boarding schools existed in the 19th century, almost all of them were in the South. At Bordentown, Black children were safe, disciplined and received a private school-quality education at a public institution. It was a little like walking into an alternate universe just passing through its gates.

In 1955, when Bordentown closed due to the Brown v. Board of Education decision and the school's inability to integrate, Bordentown was derided by the Black press and other Black institutions for being an embarrassing relic of the Jim Crow past. Once again, Bordentown was out of sync with contemporary times.

In a new, hour-long documentary called "A Place Out of Time: The Bordentown School," director Dave Davidson found some of the school's living graduates to let them tell the story of their illustrious, but forgotten school.

"It might have been different things to different people, but for me, Bordentown taught me how to handle the world," said Lionel Hunter, a 1953 graduate and president of the Bordentown Social Club.

Set on hundreds of acres of lush, green land, Bordentown was more than just a school, it was a community where the students literally and physically cared for the school. Slaughtering hogs for meals, picking fruit from the orchards, scrubbing floors with toothbrushes and painting buildings were all part of the responsibilities of Bordentown students, and that work generated pride and a sense of investment in the students. Church was held on Monday, Wednesday, Friday and Sunday mornings at the school's chapel.

"You develop your discipline and your moral values," explained Roger Coffey, a 1955 graduate and former quarterback. "I was here for four years and never kissed a girl. I was on this side, and she was all the way over there. She might as well have been in Florida," joked Coffey in reference to the strict separation of the sexes on campus.

"You got up at 6 o'clock in the morning, and you would put on your uniform, which was a white shirt, a black tie and a black skirt," remembered Betty Hunter, 1952 graduate and a member of the Bordentown Alumni Association.

Bordentown's legacy was formed by its three principals. Rev Walter Allen Simpson was the founding principal. He was replaced near the turn of the century by James M. Gregory, a Howard University graduate and a W.E.B. DuBois follower who insisted that the "talented 10th" cultivation at Bordentown had to include college preparatory courses in advanced mathematics, classical literature and foreign languages. New Jersey opted for a more Booker T. Washington approach that included courses such as washing clothes, gardening and repairing cars. Gregory resigned his post, refusing to betray the DuBois ideology.

Gregory's replacement in 1915 was 31-year-old William Valentine, a Harvard graduate and former Tuskegee Institute instructor. Valentine somehow managed to satisfy both sides of the trade or higher education debate.