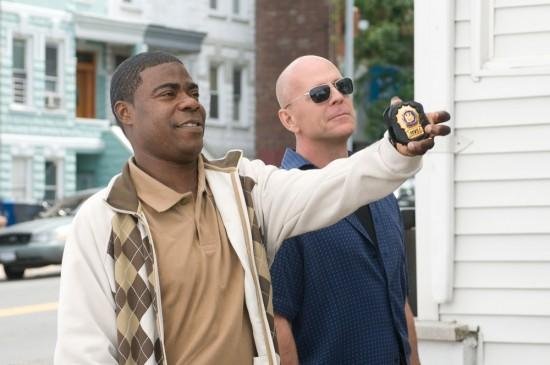 Tracy Morgan and Bruce Willis in a scene from “Cop Out”

I love the '80s. Who doesn't? All those great buddy cop films and that sublime blend of action and comedy--they just don't make 'em like that anymore.

Not that they don't try. With "Cop Out," director Kevin Smith tries to pay "hommage" to the bygone era of Gibson and Glover, Nolte and Murphy. It's a dicey situation. The genre never quite recovered from being Michael Bay-ified in the mid '90s and most latter day attempts at resurrecting it have been satirical and/or self-aware. For instance, Shane Black's excellent "Kiss Kiss Bang Bang" is as much a buddy cop flick as it is a deconstruction thereof. So, Smith's goal was to make a modern "48 Hours" without accidentally making "Pineapple Express" (which, I am aware, is not a cop movie, but it's one of the better examples of a comedic actioner in recent memory).

Working from someone else's script for the first time (it's written by first-time screenwriters Robb and Mark Cullen), Smith is given free reign to pilfer his apparently encyclopedic memory of '80s cinema. And here's how he decides to beat the system: "Cop Out" may be set in modern day New York, but all the references--from the film lines nicked in the opening interrogation scene to the soundtrack full of Patti LaBelle tunes and bloopy synthesizer instrumentals (courtesy of Harold "Beverly Hills Cop" Faltermeyer himself!)--are from the Reagan era.

As is the plot. Straight man Jimmy (Bruce Willis) and wild card Paul (Tracy Morgan) are a pair of street-beat cops. When they're suspended without pay after a chase gone awry, Jimmy is left to consider selling his 1952 Andy Pafko baseball card to cover the cost of his daughter's (Michelle Trachtenberg) impending wedding--something he's adamant about, if only to show up his wife's new, rich husband (a never-smarmier Jason Lee).

Meanwhile, Paul is convinced his wife (Rashida Jones) is cheating on him, which is constantly distracting him from his work--leading to the theft of Jimmy's prized Pafko. Soon, both they, as well as Detectives Hunsaker and Mangold (Kevin Pollak and Adam Brody), are on the trail of enterprising drug dealer and baseball aficionado Poh Boy (Guillermo Diaz), thanks in part to the help of the very thief who stole the card in the first place (the quite funny Seann William Scott).

From the opening sequence, this is an efficiently shot and edited film. A long shot of Manhattan pans across the East River as the Beastie Boys shout "No Sleep Till Brooklyn"; the title splashes across the screen as we get an obligatory feet-first shot of the main characters; Morgan's very first line of dialogue is pure exposition. The film maintains this fast clip even as it moves to more locations than in all of Smith's films combined, and through scene after scene of two guys sitting in a car talking.

But since this is primarily a film about two dudes talking--Smith's oeuvre, basically--its success comes down to the dudes doing the talking, and Willis and Morgan have a surprisingly comfortable chemistry. Though laughing at Morgan sometimes feels like a weird kind of post-ironic schadenfreude, Willis works as a grounding force. There's a palpable, natural respect between these guys that really makes the pairing click. As familiar as it all feels, "Cop Out" deftly avoids living up to its title.