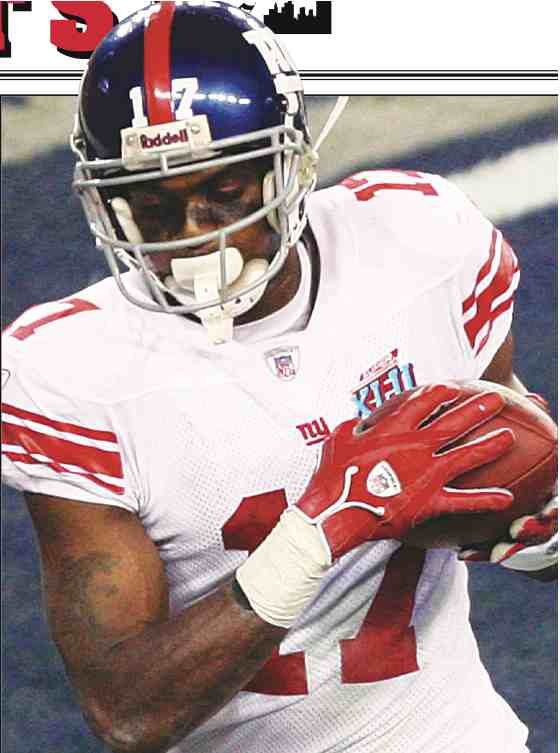 Plaxico Burress, one of the Giants many heroes on their champi- onship team, caught the winning touchdown in the team’s Super win over the Patriots. Plax is now facing criminal charges for carrying an unlicensed weapon. (Vern Verna photo)

For the New York Giants, there are two certainties to which they have become accustomed: winning and missteps by Plaxico Burress. Both happened again this past weekend, as the Giants, minus their gifted but troubled wide receiver, thoroughly handled the Washington Redskins on the road, defeating them by 23-7 to increase their record to 11-1. Conversely, the Redskins dropped to 7-5 and are now behind the 8-4 Dallas Cowboys in the NFC East, a division the Giants firmly control. Considering all that has occurred-- losing Pro Bowl defensive end Osi Umenyiora for the season to injury early on,the retirement of future Hall of Famer Michael Strahan, and the ongoing issues surrounding Burress--with four more games still remaining before the playoffs begin, this has been one of the most remarkable seasons in the history of the Giants franchise.

As they ready themselves to host the Philadelphia Eagles (6-5-1) at the Meadowlands this Sunday (1 p.m.), the futures of Burress and linebacker Antonio Pierce, who replaced Strahan as the team's vocal leader, are unsettled. Both were involved in an unfortunate incident early Saturday morning while at the Latin Quarters nightclub in Manhattan. Burress allegedly shot himself in the right thigh with a loaded .40-caliber handgun, and Pierce supposedly helped Burress cover up the accident. On Monday, Burress was charged with two counts of second-degree criminal possession of a weapon. If tried and convicted of the charges, he potentially could be sentenced to three and a half to 15 years in prison. He was ordered to return to court on March 31.

To add even more sensationalism to the story, Mayor Michael Bloomberg, who has more pressing concerns to deal with given New York's fiscal crisis, has called for Burress to be prosecuted to the fullest extent of the law. Among the obligatory and wishful comments made by Burress' defense lawyer, Benjamin Brafman, outside of Manhattan Criminal Court on Monday was his contention regarding his client. "If they let him play, he will be able to play...I think he will be a superstar for the rest of his career," said the noted attorney. But that's a big "if."

The Giants and the NFL are likely to sideline Burress for the remainder of the season. And there could also be ramifications for Pierce, though it is unlikely he will be suspended for any significant time, if any. Pierce played on Sunday against the Redskins and is expected to do so again versus the Eagles. At the time this column was written, no decision had been made on either man. It may be redundant to state that what's most important is that Burress work on getting his life together, football be damned. No one is without fault or demons. He is obviously a troubled young man who deserves the chance to redeem himself. Football can wait. He has already reached the two-minute warning of life.