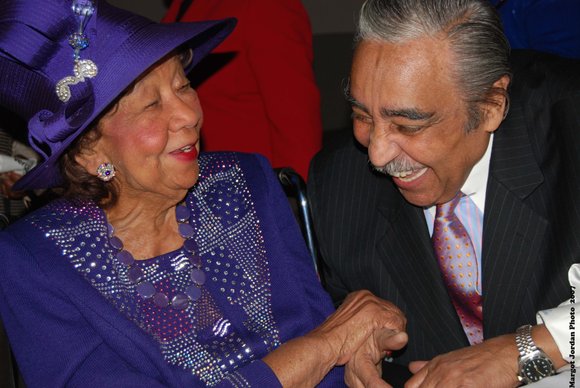 Very early in life, Dr. Dorothy I. Height had a number of career options, but she chose to serve humanity, and that service was as long as it was relentless. Height, 98, a civil rights icon, died Tuesday morning at the Howard University Hospital in Washington, D.C.

Height had been hospitalized for nearly a month, according to her nephew, Daniel Aldridge of Detroit. "She died peacefully," he said.

To recount Height's remarkable sojourn of more than 80 years is to survey the milestones of American history in the 20th century. From her teen years, coming of age in Pennsylvania, Height was a foe of injustice, working tirelessly on campaigns to end lynching.

"She was the godmother of the Civil Rights Movement," said President Obama, "and a hero to so many Americans."

During an interview on WBAI-FM with Esther Armah, Aldridge put his aunt's great life in both a personal and political perspective. "While it's true she was a strong advocate of race and gender issues, her main concern was the fight for human rights," he said. "As my aunt, she was always generous and considerate of who I was as a person, not just a relative. Her policy was to treat everybody with love and respect."

That love and respect is being returned endlessly, as dignitaries and the common folk she loved inundate the family with their condolences and warm regards for what she meant in her dedication to social justice.

"Dr. Dorothy Irene Height was a founding matriarch of the Civil Rights Movement and an outspoken advocate for gender equality," said Evelyn Gibson Lowery, a civil rights veteran and founder of the SCLC/WOMEN Inc. and the wife of Rev. Dr. Joseph Lowery. "Height worked tirelessly until her last days, advocating on behalf of women, African-Americans and underprivileged people throughout the world. She was a shining example of womanhood and her courage, intelligence and quick wit will be missed. Our prayers go out to her family and the NCNW family."

The NCNW (National Council of Negro Women) is perhaps the place where Height's legacy resonates strongest. For 50 years, Height was the president and chair of the organization, dutifully extending the impact and legacy established by its founder, Mary McLeod Bethune.

In fact, it was Bethune who recruited Height to the NCNW after noticing the poise and elegance in the way she escorted Eleanor Roosevelt to one of the Council's annual meetings. That was in 1937, two years after the founding of the organization to which Height would attach her name with profound success and accomplishments.

Height was born March 24, 1912, in Richmond, Va., and educated in Rankin, Pa., near Pittsburgh, according to her nephew and the NCNW website.

From the moment she stepped into a classroom, she excelled. Her oratorical skills won her lasting recognition and scholarships, including one to New York University, from which she subsequently earned her bachelor's and master's degrees, after being rejected by Barnard College, which said it had met its quota of African-American students. This matriculation was followed by postgraduate courses at Columbia University and the New York School of Social Work.

In a recorded interview aired on WBAI Wednesday morning, Height recalled her first days of activism as a member of the United Christian Youth Movement of North America during the early 1930s. At this momentous stage, her participation in the Civil Rights Movement was launched, she said, and in rapid succession, she was on the ramparts against lynching and working for the desegregation of the armed forces, reform of the criminal justice system and free access to public accommodations.

And these were just a few of the social issues that occupied most of the hours of her youth, Gov. David Paterson observed. "Having borne witness to discrimination, Dr. Height committed to eradicating intolerance--whether it be against a race, ethnicity, gender or religion," he said in press statement. "She marched with those tired of violence, stood with those ready for change and served for four decades as the leader of the National Council of Negro Women. Her work, which continued well beyond her retirement, has helped make for a more just society."

Many elderly Harlemites fondly remember Height when she lived and worked among them, particularly during her tenure at the YWCA and her appointment by Mayor Fiorello La Guardia to a commission to assess the tragic riot of 1935 that left Harlem in shambles.

By the early 1950s, Height's involvement in international affairs via the YWCA took her around the globe with teaching assignments in India, Burma and Ceylon. There were also important consultations in Africa where women were given lessons in self-determination and empowerment.

In 1956, after serving for nearly a decade as national president of the Delta Sigma Theta Society, Height was elected the fourth national president of the NCNW. From this position, she gradually acquired the visibility and the prestige that would place her among the ranking Black leaders in the country. At a time during the Civil Rights Movement when the Big Six included Roy Wilkins of the NAACP; James Farmer of CORE; Whitney Young of NUL; John Lewis of SNCC; A. Philip Randolph of the AFL-CIO; and Dr. Martin Luther King Jr., Height was often quietly acknowledged as the "seventh member."

Never one to bite her tongue, Height expressed her concern that women did not speak from the podium during the historic March on Washington in 1963. "The only woman you heard was the singer Mahalia Jackson," she lamented.

During the struggle against Apartheid in South Africa, she was an uncompromising foe, traveling there on many occasions to lecture and for conferences of African women.

Among the many organizations that she founded and where she served was the Black Women's Roundtable, in association with Melanie Campbell.

"I feel blessed and honored to have been mentored by Dr. Height working with her in recent years on the Black Women's Roundtable with an intergenerational network of women to promote the empowerment of women and girls," said Campbell.

"Dr. Height taught us that we must be organized and stay focused on the work, and that we are more powerful working together in unity and that 'unity does not mean uniformity,'" added Campbell, who is also executive director and CEO of the National Coalition on Black Civic Participation.

The last score of years, though emerita president and chair of the NCNW, Height lost none of the vigor and interest that had propelled her illustrious commitment to change and equal rights. She was a vocal advocate in several HIV/AIDS initiatives, and whenever Black public intellectuals assembled, she was often the voice of reason and seasons invited to share her vast experience and information.

Height, said former Mayor David Dinkins, was "ever-present in times of controversy...maintain[ing] a constant vigilance over those actions and individuals that threatened to compromise the integrity, the image and especially the well-being of the African-American community. She was like a lioness protecting her pride, and her beautiful hats and sweet demeanor belied the warrior and champion that she brought forth in times of challenge."

Along with the more than 35 honorary doctorates and a slew of awards, on her 92nd birthday, March 24, 2004, President George W. Bush presented her with the Congressional Gold Medal, the highest civilian and most distinguished award presented by the United States Congress. This prestigious award bracketed the Presidential Medal of Freedom awarded to her by President Bill Clinton.

Summarizing Height's contributions and indomitable will, Congressman Charles Rangel said: "She was a powerful voice of justice, a graceful angel with a steel spine who had no tolerance for sitting idly by or leaving the hard work for generations that followed. She embraced the challenge of helping this nation live up to its potential well into her 90s, with a style and energy rarely seen then or since."

If there was one thing Height would have the world remember her by, it was her desire to solidify the Black family. "That's why she was so diligently about creating the Black Family Reunion," said Aldridge. "She believed that without a solid, cohesive Black family, all the gains we might otherwise achieve were meaningless."

As we go to press, funeral arrangements are still tentative, according to Aldridge. "Plans are underway for the Deltas to have a memorial service next Wednesday," he said, "and the public service on Thursday at the Cathedral. All of this will take place in the nation's capital." He said his aunt had drafted her final rites about five years ago. Much more about her life can be gleaned from her memoir "Open Wide the Freedom Gates" (Public Affairs, 2003).

Height leaves to honor her glorious life and to carry on her formidable legacy her sister, Anthanette Aldridge of Queens, N.Y.; her nephews Daniel of Detroit and Philip of Queens; Daniel's wife, Dorothy Dewberry; several grandnieces and grandnephews, including Dr. Daniel Aldridge III of North Carolina.