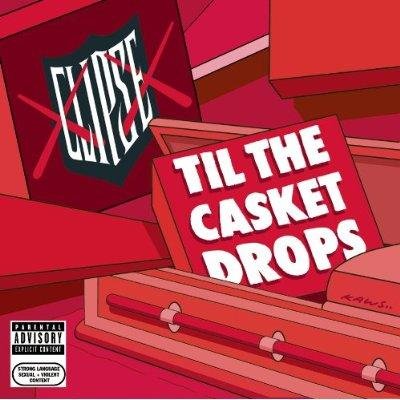 Malice and Pusha T (better known to hip-hop aficionados as Clipse) should win the award of the decade for most talked-about recording artists who don't make money off of their records. The Clipse have had the unfortunate circumstance of making albums during a time when people don't buy music. Although they did benefit from the last era of album sales (the first half of the 2000s) with Lord Willin', which featured the hits "Grindin'" and "When The Last Time," major label troubles and lack of promotion have hurt the duo.

So is the Clipse new album 'Til The Casket Drops worthy of any continuous "best of" discussions? Nope. Not at all.

Let's be honest with ourselves, while the first half of the decade saw rap take over the mainstream (and rap at its most creative commercially), the second half of the decade (with the exception of Kanye West and a few others) saw little that was challenging or boundary pushing in hip hop. Clipse have been accused of being one-dimensional and those criticisms are correct. But on TTCD their display of single-mindedness, with the exception of a few 'I'm a father now " tropes sure to satisfy their apologists, grows tiresome. Drug pushing and more drug pushing abound with a stop snitching message to boot. Nice.

Some might feel that the blogger love for the Clipse might be a result of some people growing uncomfortable with the dominant mainstream rap persona no longer spitting thug nonsense or playing up gangsta stereotypes.

Speaking of West, he makes an appearance on the album's best song "Kinda Like A Big Deal" and completely outshines Pusha and Malice. While 'Ye isn't necessarily known for his rap skills, it helps to be direct with a fantastic punchline once in a while. The Neptunes handle the majority of the production on this album with DJ Khalil adding a few tracks. Pharrell Williams and Chad Hugo display their classic slick, but sometimes gritty production on songs like "Popular Demand (Popeyes)," where Pharrell sounds like Mr. Lif on the chorus, and their radio-ready, club-ready side on "Counseling" where the Clipse tackle their female addiction over laid-back, danceable drums, airy synthesizers and background R&B vocals.

While their debut album spawned some hits and their second album was labeled a slept on classic by those who care about such things, the third output by Pusha and Malice is the best reminder of why The Clipse are talked about more than listened to.