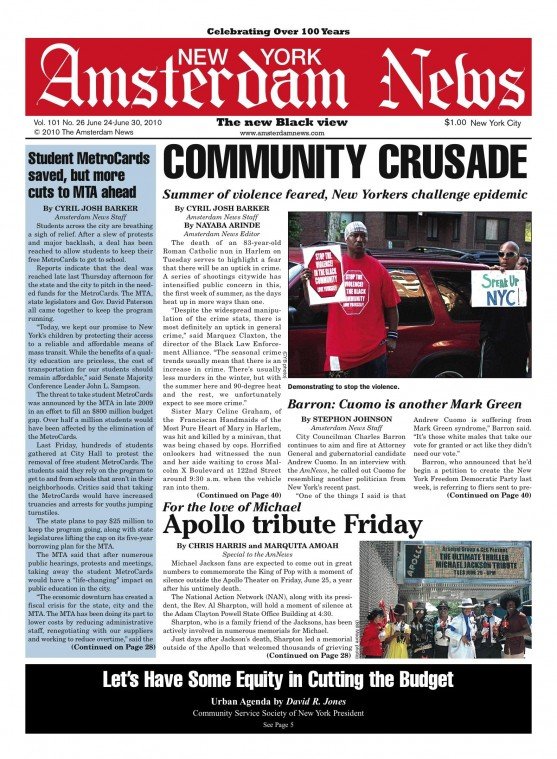 The death of an 83-year-old Roman Catholic nun in Harlem on Tuesday serves to highlight a fear that there will be an uptick in crime. A series of shootings citywide has intensified public concern in this, the first week of summer, as the days heat up in more ways than one.

"Despite the widespread manipulation of the crime stats, there is most definitely an uptick in general crime," said Marquez Claxton, the director of the Black Law Enforcement Alliance. "The seasonal crime trends usually means that there is an increase in crime. There's usually less murders in the winter, but with the summer here and 90-degree heat and the rest, we unfortunately expect to see more crime."

Sister Mary Celine Graham, of the Franciscan Handmaids of the Most Pure Heart of Mary in Harlem, was hit and killed by a minivan, which was being chased by cops. Horrified onlookers had witnessed the nun and her aide waiting to cross Malcolm X Boulevard at 122nd Street around 9:30 a.m. when the vehicle ran into them.

The Police Department said that cops had pulled over three suspects in the minivan in relation to a robbery, which had just occurred on Malcolm X Boulevard between 122nd and 123rd streets. The van was stopped on West 141st Street, and while officers pulled the driver out, the other two suspects drove off, chased by an unmarked police car.

Running through a red light, the van hit a Honda Odyssey and pedestrians.

"On June 22, in the early morning hours, two victims state they were robbed by two male Blacks driving a blue Chrysler Pacifica with New York plates," wrote 28th Precinct Deputy Inspector Harrison in a statement sent to the Amsterdam News. "The first victim was robbed at 1:50 a.m. by perpetrators who displayed a silver handgun and took U.S. funds from the victim and fled. The second robbery took place at 3:50 a.m., where an iPod was stolen from victim. Both victims described the perpetrators as two Black males in their 20s.

"[The] passenger of that vehicle then jump[ed] into [the] driver side and sped off, heading southbound [on] Lenox Avenue with patrol car following them remaining at least a block away in distance from the vehicle. At 122nd Street and Lenox Avenue [Malcolm X Boulevard], [the] robbery vehicle [ran] through a red light, hitting a parked car, thus causing [the] robbery vehicle to tailspin out of control, hitting three pedestrians standing on the median of 122nd and Lenox.