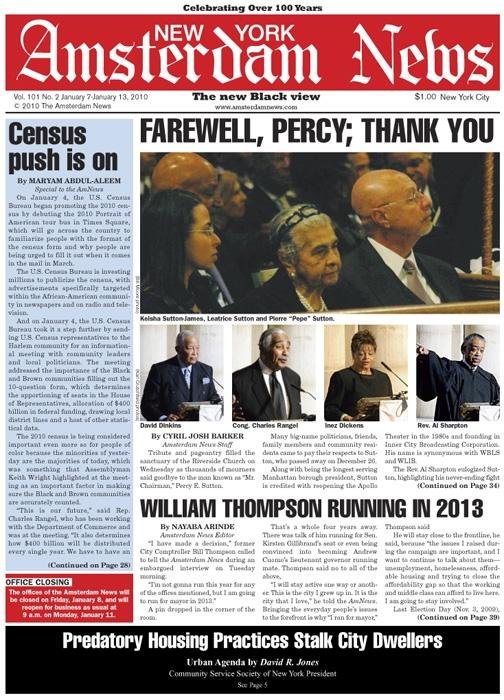 Tribute and pageantry filled the sanctuary of the Riverside Church on Wednesday as thousands of mourners said goodbye to the man known as "Mr. Chairman," Percy E. Sutton.

Many big-name politicians, friends, family members and community residents came to pay their respects to Sutton, who passed away on December 26.

Along with being the longest serving Manhattan borough president, Sutton is credited with reopening the Apollo Theater in the 1980s and founding in Inner City Broadcasting Corporation. His name is synonymous with WBLS and WLIB.

The Rev. Al Sharpton eulogized Sutton, highlighting his never-ending fight for civil rights. Sharpton told a story about Sutton's arrest in front of NYPD headquarters in 1999 after the police shooting of Amadou Diallo as an example.

"He never stopped climbing mountains," said Sharpton. "He kept on fighting and kept on believing. He didn't let America change; he changed America."

Civil rights activist Rev. Jesse Jackson opened the service by asking all of the mourners give Sutton a standing ovation. He also discussed Sutton's history of marching alongside other civil rights pioneers like Malcolm X, who he gave legal counsel to, and Martin Luther King, Jr.

Jackson said, "The tallest tree in the forest has fallen. Today, Harlem weeps, but heaven rejoices. We claim him as ours. Be at rest, Mr. Chairman. You paved the way. Be at rest."

In the political realm, government officials ranging from the city to the national level said words of praise about the man many attribute to for breaking barriers for Black lawmakers.

"He is one of our nation's true heroes," said Holder. "Percy Sutton has been a part of my life for as long as I can remember. I admire him. I respect him. Without him, there would be no me."

Mayor Michael Bloomberg said Sutton's great accomplishment "was his own life." He also said that he often asked Sutton for advice for his own political career. Bloomberg announced that a school located on Edgecombe Avenue in Harlem would be reamed Percy Sutton Educational Center.

Speaking via video, Gov. David Paterson was not present at the funeral due his obligation to give the State of the State Address in Albany. Paterson attributed his own success of being New York State's first Black governor to the sacrifices Sutton made in his life.

Members of Sutton's exclusive brotherhood of the Gang of Four--Rep. Charlie Rangel, Basil Paterson and former Mayor David Dinkins--memorialized their brother through speeches and stories.

"Percy made everyone feel like they were somebody, not just dignitaries, but ordinary people," said Rangel. "There's a little bit of Percy Sutton in all of us."

Dinkins called Sutton "the architect, an engineer for the Gang of Four" and said that Sutton gave all politicians the gift of his example.

He said, "Had there been no Chairman Sutton, there certainly would not have been a Mayor Dinkins. Then we were four, and now we are three."

Basil Paterson went through the impressive list of achievements made throughout the city, including Sutton's rebuilding of 125th Street by reopening the Apollo Theater. He closed by saying, "He was always there for the underdog. Say a prayer for the soul of Percy Sutton."

Singer Melba Moore, jazz flutist Bobbi Humphrey and Stevie Wonder were present at the funeral to give musical tributes.

Sutton's funeral was followed by a processional motorcade throughout Harlem. His body was taken in front of his former office on 125th Street and in front of the Apollo Theater, where Jackson and Sharpton led a moment of silence.