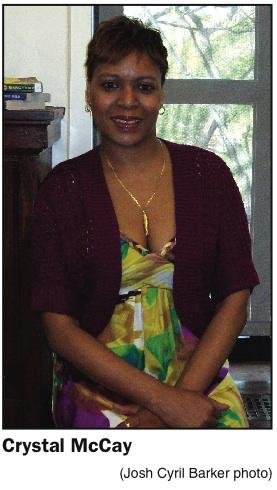 Giving a new meaning to the job of librarian, Crystal McCay is doing more than helping people find books. Site manager and supervisor for the Harlem branch of the New York Public Library, McCay, 42, said that working at an urban library requires her to go beyond the call and help people with community problems.

The Harlem Branch library, located on 124th Street, is celebrating its 100th anniversary this year, and McCay is rolling out the red carpet for the community. She's been at the library for the past three years and has been working within the New York Public Library system for the past 24 years.

Affectionately known in the neighborhood as the "library lady," McCay is from Harlem, where she grew up in Drew-Hamilton Houses. Her mother died when she was 12, forcing her to help her father raise the family.

McCay was sent to boarding school when she entered high school at the Westminster School in Simsbury, Conn., through the "A Better Chance" program. She said that going away for school was best for her because it saved her from the streets.

She speaks highly of her experience at the co-ed boarding school. With a student body of over 300 students and only 15 Black students, McCay said that she was welcomed and treated like everyone else.

"One thing about my school is that no one knew if you were rich or poor, everyone had to do chores. When I look back, it was the best experience I ever had," she said.

Aspiring to go away for college, her dreams were halted when her father began a drug addiction that led her to stay close to her family. She attended college at St. John's University.

However, after one year, she left school after she had two children.

To make money, McCay got a job working at a public library in Midtown Manhattan, working as a page in the photography department. Over the course of 10 years, she moved up the ranks and became a clerk.

Coworkers constantly told her she would make a good librarian. After a decade, McCay went back to school at the College of New Rochelle, where she earned her bachelor's degree in social science. In 2001, she earned her master's degree in library science.

"It opened the door for a lot of opportunities for me," she said. "I'm a new-age librarian and I like working in my community."

McCay said that working in the library today means knowing more than just books. She supervises a staff of 20 people, works with her branch's budget and does computer tech work. McCay also serves on Community Board 10. At her branch, she said that people often come in asking questions about services in the city like health services, job placement and housing programs. McCay said she doesn't hesitate in answering any questions.

Due to the recent crumbling of the economy, libraries across the city have seen a sharp increase in use because of the many free resources and programs they offer. NYPL has seen 17.5 million in-person visits in year, a 12 percent increase from last year.

"Whether I'm helping a 12-year-old student find a book for their homework or I have someone come in trying to find the nearest homeless shelter for their family, no one's question about information is more important than someone else's," she said. "I tell people I don't know everything, but I can help you find anything."