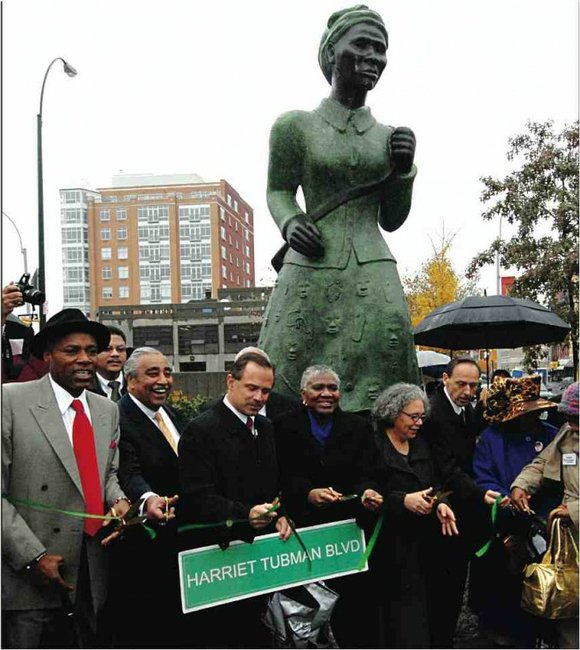 Former Manhattan Borough Pres. C. Virginia Fields arrived at the dedication of the Harriet Tubman statue just in time to relate exactly how the process began several years ago. "Every great dream begins with a dreamer," Fields said, and this one began with an eight-year-old student at Harriet Tubman School who asked why there was no statue in the city of a Black woman. "His mother told me the story," Fields continued, "and since he raised the question, I was motivated to do something about it."

It has taken a little bit longer than the planners intended for the larger-than-life bronze replica of the great freedom fighter to be positioned at the intersection of 122nd Street, St. Nicholas Avenue and Frederick Douglass Boulevard. But, despite a steady drizzle, a crowd of notables, students and residents attended the event, including Pauline Copes Johnson and Geraldine Copes Daniels, two of Harriet Tubman's great-grandnieces. A number of dignitaries were on hand to salute Alison Saar, the artist whose vision and tenacity completed the $2.8 million project, which was designed by Quennell Rothschild.

Cong. Charles Rangel said that he has spent more than 40 years in Washington, D.C., looking at statues with strange white men on horses, never knowing who they were. "But now we have one of a Black woman who had the courage to believe," he said. Of all the brave abolitionists, particularly those conductors of the Underground Railroad, Tubman's legend is perhaps the best known. It is widely agreed that she made 19 trips into the bowels of the South, rescuing some 300 people from bondage, with not a thought to the danger she faced.

Historian Christopher Moore of the Schomburg Center put her life into perspective when he referred to her as the "Lady Liberty of the North, the Moses of her people."

There were several moving performances from the children of A. Philip Randolph and the Harriet Tubman Schools. "I am a promise to be anything you want me to be," a chorus of students intoned.

"It's all about our young people," said State Sen. Bill Perkins. "It's about our American legacy and our determination to defy the odds." He also explained why the Tubman statue was facing south. "She was going back to rescue more people."

Tubman was the "Sweet Chariot" that vocalist Jackie Rowe Adams invoked in her song as she provided the bridge to the ribbon cutting ceremony.

Not too far from the statue, Shakur Afrikaans protested, voicing his concern that the statuewas not representative of Tubman, since she was without her trusty musket and has roots trailing behind her.

Those roots, said Saar, were emblematic of her depiction of Tubman not as the conductor, "but as the train itself, an unstoppable locomotive" with the roots of slavery pulled up in her wake.

"I have nothing but love and respect for Shakur, but he has to understand that each artist should be free to interpret a historical moment in their own way," said Voza Rivers, who played a significant role in coordinating the dedication.