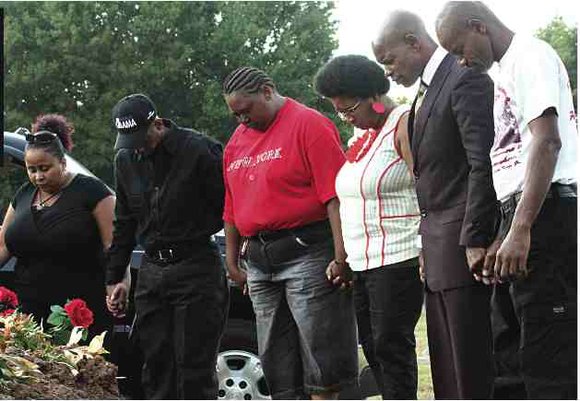 Brandon McClelland, inset, and the McClelland family at his gravesite (Jesse Muhammad Photo)

When the body of a 24-year-old Black man in Paris, Texas, was discovered in the middle of a busy Texas road, law enforcement declared the case a hit-and-run by an unidentified driver.

Now the small, racially divided town's worst fears are brewing, with evidence pointing towards two white men who had picked up Brandon McClelland in their Dodge truck before he was found mutilated and dismembered last month. Forensics by the Texas Rangers discovered blood from McClelland and other DNA evidence on the undercarriage of the truck, which has the family calling it a "Jasper-style" lynching. "They tied my son to that truck and dragged him until his body parts were detached," said his mother, Jacqueline McClelland. "His body was so destroyed that it could not even be embalmed by the funeral home. This is a hate crime. I don't want the death penalty for these killers because that would be too quick. I want them to suffer for life in jail without parole since I will never have my son back." The Lamar County district attorney has taken the stance that race is not a factor in the death of Mr. McClelland, being that he was friends with the alleged assailants Shannon Finley and Charles Ryan Crostley, both of whom are 27 years old. But angry family and community activists are demanding a thorough investigation by Paris authorities as a possible hate crime, paralleling the lynching of James Byrd Jr. in Jasper, Texas, which is situated several hours south of Paris. In 1998,Byrd was strapped to a pickup truck and dragged to death by three white supremacists, who were eventually convicted of murder. The case spurred massive protests and drew international outcry, which Paris authorities are trying to avoid but may have a hard time doing.

According to a police report, McClelland was walking in front of the pickup a little after 4 a.m. on Sept.16 when Finley and Crostley allegedly ran him down and then dragged him up and down a Lamar County road until his disfigured body popped out from beneath the chassis. "I don't see how it was racial, being as how they were good friends," said Stacy McNeal to the local press. He is the Texas Ranger who is leading the investigation. "This was not a hit-and-run. They [Finley's family] hid the truck and even tried to wash the blood off. The police didn't even tape off the crime scene and some of my son's body parts were still lying out there," said Ms. McClelland, as she wiped away tears. "If that would have been a white person killed, they would have handled this immediately. This is just like Jasper," she said. It was also stated that the family was forced to have the funeral immediately due to pressure applied to the funeral home director, although they desired to delay it for further investigation. "He [the funeral director] was told by the police to hurry up and put the body in the ground because they didn't want any trouble coming to this town," said Ms. McClelland. "They took the life of my only son." "I was awakened by our dog barking around 4:25 a.m., but I couldn't see what occurred because our camper trailer was blocking my view from my back porch. I wish I could have seen more," said a white resident, Mrs. Baker. She along with her husband and son live a few feet from the scene of the crime. "We think this is horrible," said Mr. Baker, who added that their home is in proximity to the residences of eight law enforcement officers so "things like this hardly happen over here and this was sad." Crostley was arrested and is being held in the Lamar County Jail with a bail exceeding $500,000. Finley has waived his right to extradition from Wichita, Kan., where he was arrested. Both men are charged with murder and tampering with evidence. In 2003,Lamar County District Attorney Gary Young served as Finley's court-appointed defense attorney when Finley pleaded guilty to manslaughter for shooting a friend to death. The victim in Finley's manslaughter case was white and he told police that he was sitting in a truck with his friend when two Black men supposedly tried to rob them.