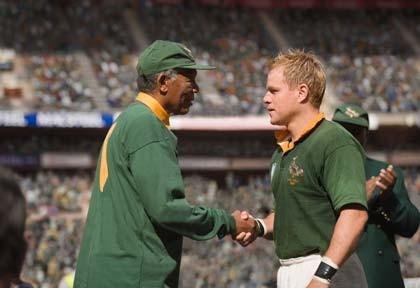 Clint Eastwood. Morgan Freeman. Matt Damon. This iconic Hollywood team, weighing in as director/producer, actor/executive producer, and actor respectively, is the venerated brand behind the highly anticipated film "Invictus," which will be released on December 11. The film, which, due to global time zone differences, will premiere first in South Africa and hours later in the United States, also has another world-renowned identifying brand: Nelson "Madiba" Mandela.

Based on the book "Playing the Enemy" by the British author/journalist John Carlin, "Invictus" is an uplifting, eye-opening true story wrapped in a rugby game that challenges humanity to be more human. The screenplay, written by the South African screenwriter Anthony Peckham, constructs an unlikely partnership between two racially diverse, multi-generational South Africans who grew up in a world shaped by apartheid.

On the one hand, there is the newly elected elder, President Nelson "Madiba" Mandela (Morgan Freeman), a Black South African and former anti-apartheid activist who was imprisoned for 27 years for his stance against the policies of racial discrimination that oppressed Blacks while maintaining white supremacy in the nation. Then there is the young Francois Pienaar (Matt Damon), the white South African captain of the nation's underdog rugby team, the Springboks, who grew up on the privileged side of the racial divide.

"Invictus" opens sometime in 1994, the year Mandela was elected president. As the new leader, he is totally cognizant that while apartheid has been officially dismantled, the racial hatred between Blacks and whites is still the reality of the day. At this crucial, transitional time in South Africa's history, a divine opportunity presents itself in the form of the 1995 World Cup Finals, which South Africa is set to host. The astute Mandela sees this window and immediately whips into motion a plan to utilize the popular sport of rugby to unite the country behind their national team, the Springboks.

However, there is one major drawback to this idea: Though South Africans love the game of rugby, the citizens are at odds when it comes to the Springboks, who are well-loved by the whites and despised by the Blacks. Acknowledging the color divide, Mandela, who dreams of a beautiful "rainbow nation," moves ahead to implement his plan, starting with the Springbok's colors of green and gold.

This intimate yet far reaching Warner Bros. Pictures presentation scores green for predicted high box office revenues and gold for a gentle, yet hard-hitting film that speaks to the human soul.