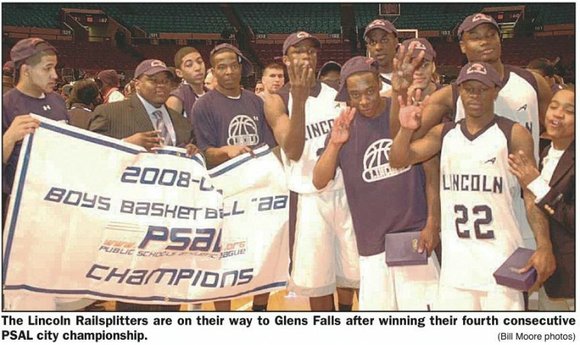 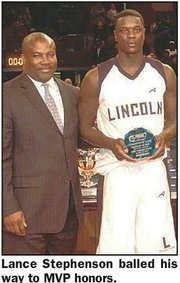 For Lance Stephenson and the Abraham Lincoln High School boys basketball team, their 78-56 victory over John F. Kennedy in the PSAL Class AA championship game on Saturday at Madison Square Garden turned out to be more of a coronation than it was a competition.

Stephenson and the Railsplitters easily handled the Knights and now stand alone as the only boys program to ever capture four consecutive Public School Athletic League basketball titles. In amassing a game high 24 points in only 26 minutes, Stephenson was named the MVP. "This is amazing," said Lincoln's senior forward James Padgett, who finished with 17 points and 14 rebounds. "We wanted to make history and we did."

Lincoln (21-10) will next meet Harlem's Rice High School (23-3), the CHSAA (Catholic league) champion, in the state federation semifinals this Saturday in upstate Glens Falls. While Kennedy entered the Garden self-assured and highly capable of ending Lincoln's title run, there was the daunting specter of having to overcome Stephenson, one of the most decorated players in the history of high school basketball. But when Stephenson was called for his third foul late in the second quarter, Kennedy, trailing by only 33-32, was filled with visions of an upset.

Yet, their prosperity was short lived. Naquan Pierce, who topped Kennedy with 17 points, and his teammates were unable to sustain their momentum. "That was the worst thing that could have happened to us," lamented Kennedy coach Johnny Mathis. "We became complacent when Lance went out." Ever since he was a preteen honing his skills on the courts of Brooklyn, greatness was forecasted for the 6-foot-5-inch guard. Like most child prodigies, Stephenson's ascent has been well chronicled and scrutinized. With sharks of various species in quest of personal gain, seeking to exploit the young man's ample gifts, on the hardwood he has exceeded the unhealthy expectations placed upon him. Among his numerous honors, Stephenson is the all-time leading scorer in New York State history with 2,832 points.

"Yeah, I sometimes think about it," said Stephenson of the enormous burden that comes with being supremely gifted. "But I just try to not let it get to me too much." "He's a special player," said Lincoln's coach, Dwayne "Tiny" Morton. "We are all very fortunate to have him as a part of this school and program." Stephenson will reveal his plans for the immediate future at the McDonald's

All-American game in Miami, which will be held on April 1.