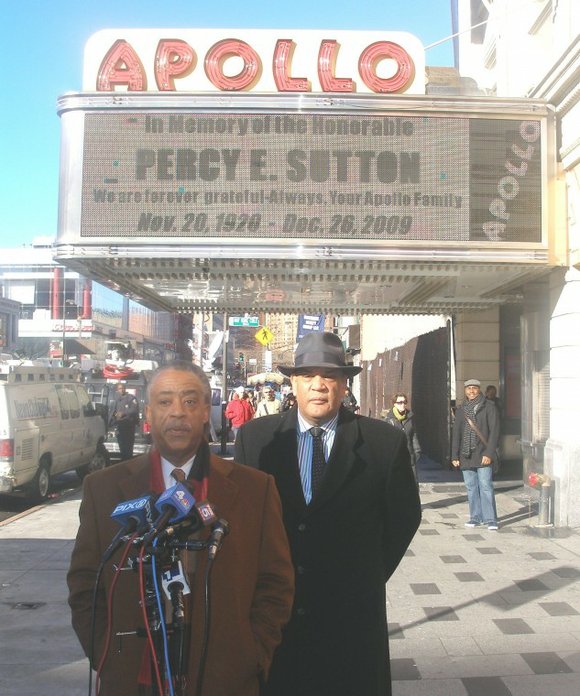 Percy Sutton will be funeralized at the Riverside Church, 490 Riverside Drive, New York, Harlem, on Wednesday, January 6, at 11 a.m. The Sutton family has confirmed that they have asked Rev. Al Sharpton to deliver the eulogy. The service will be open to the public. For more information regarding the funeral, contact the Terrie Williams Agency at (212) 316 0305.

In Harlem's glorious pantheon, Percy Ellis "Mr. Chairman" Sutton, a Tuskegee Airman, was among its most cherished icons. But his power and influence had a global significance and resonated beyond the corridors of Harlem where he was a highly regarded attorney, entrepreneur, civic leader, civil rights activist, and patriarch of a prominent family. Sutton, 89, died quietly in his sleep Saturday, December 26 in New York City.

around the country," said President Barack Obama. "We will remember him for his service to the country as a Tuskegee Airman, to New York State as a state assemblyman, to New York City as Manhattan Borough President, and to the community of Harlem in leading the effort to revitalize the world

"His life-long dedication to the fight for civil rights and his career as an entrepreneur and public servant made the rise of countless young African Americans possible. Michelle and I extend our deepest condolences to his family on this sad day," the president continued.

From around the world, condolences arrived to the Sutton family as they prepared to mourn his passing. But it was in his beloved Harlem that the grief was most visible and tearful. "When he walked down 125th Street everybody knew who he was and [he] always took a little time to greet them and ask how they were doing," said Tariq, a vendor. "He possessed such elegance, so debonair and always smartly dressed."

"Tonight, we say farewell to one of New York's and this nation's most influential African-American leaders - a man whom I am proud to have called a friend and mentor throughout my entire career," said Governor David Paterson. "Percy Sutton was a trailblazer," he continued. "He began his career as a prominent lawyer for Malcolm X and then took Harlem by storm as a leader of the Harlem Clubhouse where he launched not only his own successful political career but, as a member of the Gang of Four, spawned the successful careers of so many other African-American leaders. It was Percy Sutton who talked me into running for office and who has continued to serve as one of my most valued advisors ever since."

When Sutton purchased and renovated the Apollo Theater in the early '80s, it sparked a renewal of 125th Street, said the Rev. Al Sharpton at the press conference outside the Apollo on Sunday morning. "I've known Percy since I was 12 years old," Sharpton recalled. "In 1972, when the National Black Political Assembly had its convention in Gary, Indiana, Percy paid my way As far as I'm concerned he is the quintessential Afican American of the 20th century."