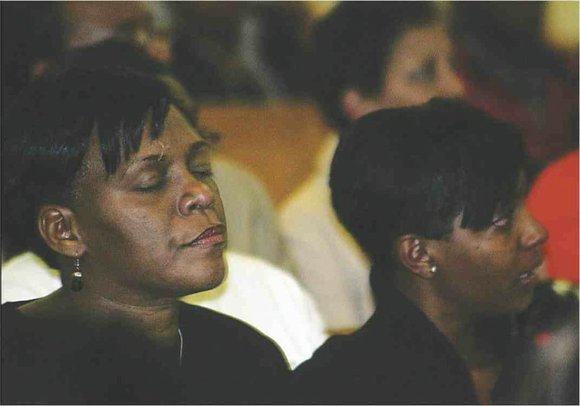 Two years since marking the death of Sean Bell, family members and those still aggravated by the outcome continue to stay focused in the quest for justice.

On Monday night and Tuesday morning, family members, supporters, clergy and elected officials turned out for an all-night candlelight vigil that ended with a memorial service in Jamaica, Queens, for Bell. In the second year since the death of the 23-year-old killed by police in November 2006,the Sean Bell case has seen it share of extreme disappointment. But with a new presidential administration and news of an investigation by the U.S. attorney's office, a new hope has been established. Bell was shot just hours before his wedding by the NYPD near Club Kaula in Jamaica, Queens. Undercover officers shot 50 bullets at Bell's vehicle, claiming self-defense. Two of Bell's friends, Joseph Guzman and Trent Benefield, suffered serious injuries. No weapon was found in the vehicle.

Three detectives were charged with manslaughter and reckless endangerment. In April, State Supreme Court Judge Arthur Cooperman found Officers Gescard Isnora, Michael Oliver and Detective Marc Cooper not guilty in a highly publicized trial. The verdict triggered immediate outrage and a civil disobedience protest in May that slowed down traffic across the city. Last week, attorneys of the Bell family met with federal prosecutors at the U.S. Attorney's Office for the Eastern District. At the meeting, prosecutors and attorneys discussed an investigation that could lead to possible civil rights charges against the officers who were acquitted in state court. "Justice doesn't always come as swift as they say," said attorney Michael Hardy. "Sometimes it comes in a while. We recently met the U.S. attorneys in this case where the families were present. While they were encouraged by those words, it's more important that they continue to have faith that justice will be done." On Tuesday morning after the all-night memorial, a crowd of about 50 people lit candles at the spot where Bell was killed on Liverpool Street between 94th and 95th avenues. At 4 a.m. there was a candle-light vigil along with a bell ringing 50 times signifying the number of bullets cops shot at Bell and the two other men in the vehicle.

Following the hour-long vigil, the group marched down Sutphin Boulevard in the rain to a memorial service. At the head of the group, the Rev. Al Sharpton, Councilman Charles Barron, Rev. Herbert Daughtry, Sen. Malcolm Smith and Nicole Paultre-Bell marched to Praise Tabernacle Church. "The reality is that even two years later, many of us realize that that could've been us sitting in that car," Sharpton said. "There is nothing Sean Bell, Joe Guzman or Trent Benefield did that caused what happened that night."

Sharpton pointed out that now that the federal government is getting involved, the chances of getting justice are greater and that the officers can be found guilty of violating Bell's civil rights. He said chances of understanding and justice are increased with the election of President-elect Barack Obama, Gov. David Paterson in office and Sen. Malcolm Smith, who will be leading the State Senate. Sharpton is also depending on Black elected officials to pass "Sean Bell legislation." He said, "We expect the people we send to remember why they were sent. I've seen Blacks rise to big places before and shame us. I hope that there is an era of change where we don't forget the Sean Bells and the Joe Guzmans or the Trent Benefields." Family members and friends of Bell also shared their thoughts over the last two years. Nicole Paultre-Bell, Sean Bell's fiancee, thanked all of the supporters for their work over the last two years. Paultre-Bell tearfully read a letter she wrote to Bell, promising to remain strong as she looked for justice and also be strong for their two young daughters.