Roxy Paine's sculpture at the Met 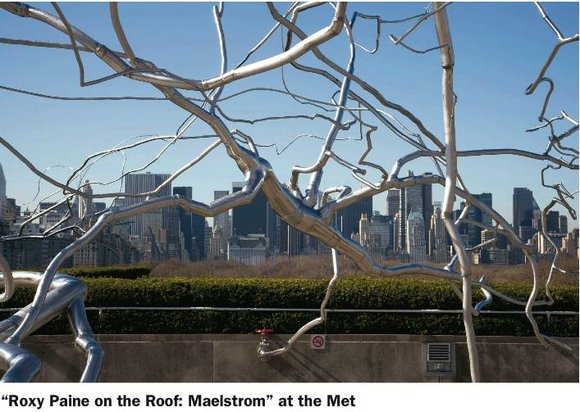 Roxy Paine's sculpture at the Met

It's simply amazing! Conceptual artist Roxy Paine (American, b. 1966) has created a site-specific monumental installation for the 2009 season of the Metropolitan Museum of Art's Iris and B. Gerald Cantor Roof Garden. It's the most dramatic outdoor space for sculpture in New York City.

"Roxy Paine on the Roof: Maelstrom" features a 130-foot-long by 45-foot-wide stainless-steel sculpture, "Maelstrom" (2009). This magnificent piece encompasses the nearly 8,000-square-foot Roof Garden and is the largest sculpture to have been installed on the roof of the Met. Set against and in dialogue with the greensward of Central Park and its architectural backdrop, this swirling entanglement of stainless steel pipe showcases the work of an artist who is keenly interested in the interplay between the natural world and the built environment. He has also been inspired by the human desire for order amid nature's inherently chaotic process.

In fact, the 42-year-young artist expressed five inspirational keys to his creation: "1) a forest that's been downed by an unseen, violent, catastrophic force, either natural or man- made.2) a chaotic, uncontrolled force of nature: swirling, grinding, boiling, disordered, tumultuous, like a maelstrom. 3) a tree that's in the process of becoming abstract; that is stretching, expanding and contracting, breaking apart and coalescing again.4) a metaphor for a mental storm, such as [what] occurs during an epileptic seizure. The dendritic forms suggest neutral forms. They reference neutral networks.5) an industrial pipeline run amok: acknowledging and embracing the industrial origins of material itself. This is industrial pipe used typically in pharmaceutical and chemical facilities."

Pain explained, "I call these projects 'dendroids' because it is a term which opens up a conceptual framework. These projects have always referred to, and resonated with, not only botanical structures such as trees, but also vascular, neutral and geologic systems, as well as engineered structures. The 'oid' part of 'dendroid' is important to me as it suggests android hybridization and robotization."

On view from April 28 through October 25, this exhibition is made possible by Bloomberg.

"Roxy Paine has created for the Met his most remarkable work to date, a stunning sculpture that commands the environment through interaction. I feel certain visitors will marvel at the complexity of the structure and delight in its beauty," said Gary Tinterow, the Met's Engelhard chairman of the Department of 19th Century, Modern and Contemporary Art.

Born in New York in 1966, Paine grew up in the suburbs of Northern Virginia.He left home at age 15.Criss-crossing the United States, he studied art at the College of Santa Fe, New Mexico (1985-86), and Pratt Institute in New York (1986-88). Since 1990, his work has been exhibited internationally and is included in a wide spectrum of public and private collections in the United States and abroad. He lives and works in Brooklyn, Long Island City and Treadwell, New York.