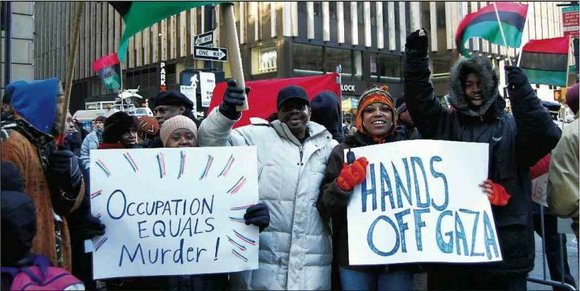 As Israel intensified its brutal attack on the Palestinian people from the air and on the ground in Gaza on Saturday, outraged protesters took to the streets around the world. Thousands filled Times Square in New York City. People of all ages and nationalities marched to the Israeli consulate in solidarity against the decades of Israeli oppression and in support of Palestinian resistance. Massive protest rallies in San Francisco, London, Paris, Berlin, the West Bank, Beirut, Istanbul, Amman, Tehran, Cairo, and Damascus may harm Israel's international relations. In New York City, many Black organizations and individuals joined the protest and are building a "Blacks Against Genocide Coalition." Human rights attorney Roger Wareham of the December 12th Movement said, "African people in the U.S. recognize our historic ties with the people of Palestine and have stood in solidarity since the early 1970s.The conflict in Gaza is a continuation of a protracted struggle for freedom of the people and their homeland. Israel's vile attacks on Gaza are in violation of international law regarding 'collective punishment' of an entire nation of innocents for the alleged acts of a few."

"We demand that our elected officials, in particular, the Congressional Black Caucus, stand in opposition to the Israeli assault. We demand sanctions be brought against Israel, and we demand divestment in U.S. corporations which support Israel," Wareham declared. "The Blacks Against Genocide Coalition will work to ensure that this genocidal attack and blockade of the Palestinian people is ended," he concluded.

While Palestine has no standing army and only elementary weapons, Israel has officially declared war and unleashed thousands of soldiers, air strikes, tanks, and helicopter gunboats. Over 600 Palestinians and five Israelis have been killed in the conflict, which began less than two weeks ago. Israeli officials maintain their principal target is the leadership of the Hamas party, who allegedly provoked Israel by launching low-range unguided rockets into Israeli territory.

Viewed through a wider lens, the situation looks more complex. In January 2006, Palestine held democratic parliamentary elections, and the people overwhelmingly voted for the candidates in the Hamas party. Israel and the United States were stunned that the pro-Western candidates in the Fatah party had lost control of the parliament. Hamas won 76 of the 132 seats. The U.S., Israel and other European countries quickly imposed severe economic and diplomatic sanctions on Gaza and the West Bank, demanding the removal of Hamas "terrorists" from the Palestinian parliament.

The international economic embargo and the surrounding security fence put Gaza in a precarious position. Israel controls everything entering Gaza with military checkpoints. Faced with severe shortages of basic food, medicine and other necessary supplies, Hamas began to tunnel into Egypt to obtain these provisions. Underreported is the issue that Hamas party officials and elected officials are methodically arrested, detained and killed by Israeli Defense Forces.

Similarly, political observers note Western sanctions against Zimbabwe's Liberation Party ZANU-PF (Zimbabwe African National Union-Patriotic Front) are being used to destabilize the country and facilitate a pro-Western regime change. The underlying issue in Gaza and Zimbabwe is control of the land and resources of the region. For more information on the Blacks Against Genocide Coalition, call (718) 398-1766.