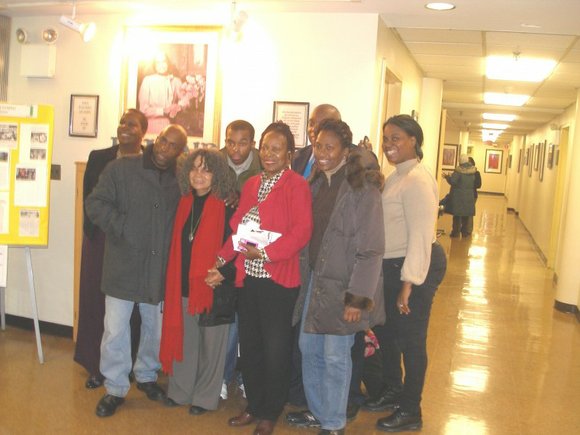 Experiencing a poetry reading by Sonia Sanchez is to hear one of the world's great wordsmiths in action, but the students and faculty at the College of New Rochelle's Rosa Parks Campus in Harlem were treated to another facet of Sanchez's amalgam of gifts--renditions from her plays.

Among the more gripping segments were those she performed from "Two Times Two" and "I'm Black When I'm Singing, and Blue When I Ain't," which is the title of her recent book of plays.

"I wasn't aware of how many grandmothers were taking in children," Sanchez told the audience. It was a theme that many of the nontraditional students, mostly women, could relate to.

"No one writes about these brave young people," Sanchez continued, referring to the current crop of activists who are determined to renew the struggle for social and political justice. She depicted a scene where Ramona, one of her characters, is marching with her sign denoting her disgust with the brutal behavior of police in Philadelphia.

There are riveting scenes of the present confronting the past, as Sanchez noted, but most importantly are the children, "who need a little peace given the noise and violence" that surrounds them, she stressed.

When one of the students asked her if she offered advice to directors and performers in her play, she said her tendency was to stay out of the way. "I have assisted performers, particularly when it's about a gesture or style," she added.

But the reading wasn't all about her plays and the roster of unforgettable characters. She closed with a few haikus from "Morning Haiku." She easily met the challenge of compressing insight and profundity in the limitations of the haiku, "which is usually a 5-7-5 format of 17 syllables," she explained.

Three of the poems dedicated to the late jazz immortal and percussionist Max Roach capture the essence of the form and her content while reducing the syllables. "Nothing ends/every blade of grass/remembering your sound," and "Your sounds exploding/in the universe return/to earth in prayer." And finally: "As you drummed/your hands kept/reaching for God."

And Sanchez, through her art, keeps reaching for a similar destination and resolution.