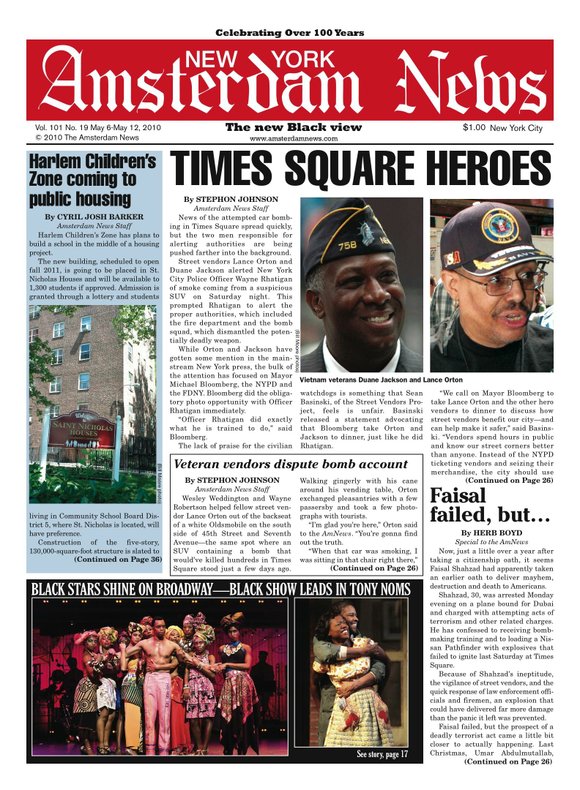 News of the attempted car bombing in Times Square spread quickly, but the two men responsible for alerting authorities are being pushed farther into the background.

While Orton and Jackson have gotten some mention in the mainstream New York press, the bulk of the attention has focused on Mayor Michael Bloomberg, the NYPD and the FDNY. Bloomberg did the obligatory photo opportunity with Officer Rhatigan immediately.

"Officer Rhatigan did exactly what he is trained to do," said Bloomberg.

The lack of praise for the civilian watchdogs is something that Sean Basinski, of the Street Vendors Project, feels is unfair. Basinski released a statement advocating that Bloomberg take Orton and Jackson to dinner, just like he did Rhatigan.

"We call on Mayor Bloomberg to take Lance Orton and the other hero vendors to dinner to discuss how street vendors benefit our city--and can help make it safer, said Basinski. "Vendors spend hours in public and know our street corners better than anyone. Instead of the NYPD ticketing vendors and seizing their merchandise, the city should use vendors to act as the 'eyes and ears' of the police in combating real crime."

Basinski also started a Facebook group called "Mayor Bloomberg, take the Hero Street Vendors to Dinner" earlier this week and hopes that the mayor gets the picture.

"Clearly vendors are an integral part of this city's fabric--and safety," Basinski said. "Now is the time for the city to change direction: to treat vendors as the beloved business owners they are, instead of a nuisance."

Basinski also noted that Bloomberg "rejected lifting the cap on vending permits that prevents hundreds of New Yorkers a year from setting up shop on street corners....His Parks Department has led an effort to ban most artist vendors from Manhattan's major parks, while his Department of Health cracked down on vendors' ability to take basic bathroom breaks."

According to a spokesperson for Bloomberg, the mayor did acknowledge Jackson. Bloomberg and Jackson gave a joint interview to "Good Morning America" on Monday and were still looking for Orton. But Bloomberg's real alliance appeared to be with the hired officers instead of the watchdog civilians.

Bloomberg spoke to the media again on Tuesday morning surrounded Council Speaker Christine Quinn, Senator Chuck Schumer, members of the Engine 54 Ladder 4 firehouse (located at 48th Street and 8th Avenue) and Lance Orton. Orton was briefly acknowledged during Bloomberg's speech, but the mayor's praise was focused on the firefighters, who have a history of responding to terrorist threats. Bloomberg mentioned that 14 officers from the firehouse died during the September 11 terrorist attacks.

"This was an act that was designed to kill innocent civilians," said Bloomberg on Tuesday. "I want to personally thank the members of the fire department who took part in stopping this. I wanted to thank all of them with their response to the car bomb in Times Square. Many of these guys responded when police officers noticed the fire and alerted authorities."

Buried in the middle of his speech, Bloomberg decided to heap praise on Orton for about a minute or so.

"[We] wanted to give a special thanks to Lance Orton," Bloomberg said. "Lance is the person who first alerted us. Lance has served his country before in the Vietnam War. He did exactly what every New Yorker should do: He saw something; he said something."

While Mayor Bloomberg looked to be dragging his feet through the mud to honor the real heroes, one local politician has stepped up and made an offer to properly acknowledge Orton and Jackson.

"In light of reports that the mayor has failed to invite the real heroes--the vendors who alerted the police to the smoking SUV--to dinner, on behalf of my grateful colleagues and as chairman of the NYS Association of Black and Puerto Rican Legislators, I would like to issue a dinner invitation to Lance Orton and Duane Jackson to dine at the Blue Fin restaurant with members of our association," Assemblyman N. Nick Perry

The post by Perry was later confirmed by his communications director, Frank Shea.