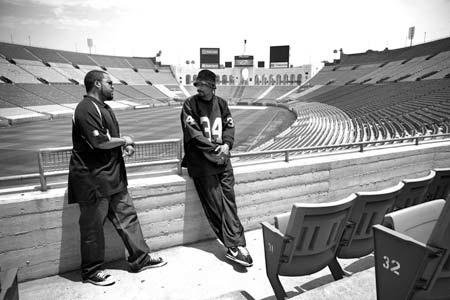 Becoming another New York Spring tradition, New York's biggest film festival rolls around again this week. The Tribeca Film Festival is chock full of not just films, but fun events, lively and informative panels and discussions, and two platforms from which you can participate in the festival from anywhere in the world.

Beginning April 21, the festival will be punctuated by the premiere of Ice Cube's ESPN documentary flick "Straight Outta LA" on Friday April 23. The documentary focuses on the way the LA Raiders football team ironically ended up exerting such a strong cultural influence on hip-hop. On Saturday, April 24, Ice Cube will appear live as a participant in a panel discussion on sports filmmaking.

The latest installment of the Shrek enterprise, "Shrek Forever After" featuring Eddie Murphy, will also premiere at this year's festival; the movie will be the first 3D film to play at the Tribeca Film Festival. As an added bonus, the cast of "Shrek The Musical" will perform at the Tribeca Film Festival Family Street Fair on May 2. You should also be on the lookout for Quincy Jones' beautiful progeny, Rashida, as she stars in the drama "Monogamy." Vogue contributing editor and fashionista with the mostest, Andre Leon Talley, will appear in the documentary "Ultrasuede: In Search of Halston." You might remember Talley as the person who introduced Michelle Obama to designer Jason Wu, who designed her gown for the inaugural ball. Talley will also participate in one of the many interesting panel discussions offered during the festival. Lovely British actress Naomie Harris ("28 Days Later," "Pirates of the Caribbean: Dead Man's Chest") stars in the biopic "Sex, Drugs, and Rock n Roll."

You may also be interested in two films that don't have big stars, but promise to engage the viewer by tackling thorny issues. One, "The Other City," explores the disproportionate number of AIDS cases in Washington, D.C. The other, "Earth Made of Glass," takes a close look at Rwanda 16 years after the devastating genocide.

This year's fest marks a watershed in entertainment history as well. Ushering us into the future of film consumption, from April 23 to April 30, much of the festival will be offered in the form of video on demand as well as online at TFF Virtual and TFF Virtual Premium. That is, you will be able to buy a ticket to watch many of the films, panel discussions, awards ceremonies and red carpet events playing at the festival on your computer and on your TV at home.

TFF's eagerly anticipated annual free events will also be back this year. The Family Street Fair will be May 2. ESPN, a partner with Tribeca Film Festival, will also put on its Sports Fair. There is also the free drive-in and a number of free workshops at Apple Store SoHo.

The festival runs from April 21 to May 2. For more info, visit www.tribecafilm.com.