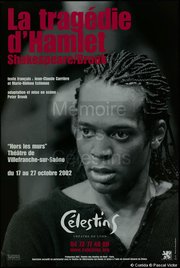 This quote by the great civil rights leader Martin Luther King Jr., whose memorial preview is underway in Washington, D.C., this week, served to frame a recent conversation with the brilliant actor/director William Nadylam, who had just returned to his Paris home base from Sidney, Australia.

Last year, a major career challenge was presented to Nadylam, who was enjoying a sweet succession of leading roles that included the French feature film "White Material" (France/Cameroon, 2009), directed by Claire Denis, and the African feature film "L'Absence" (Guinea, 2008), directed by Mama Keita.

In addition was the Euzhan Palcy-directed French television feature, "The Brides of Bourbon" (France/Reunion Islands, 2007), which was shot in the Reunion Islands, the birthplace of Nadylam's mother, who married his Cameroonian father when he came to her country to study medicine.

Despite this strong body of work, Nadylam decided to put his career on hold last year to work on a project in a non-leading role that included working behind the scenes.

"I was in New York last April in the Steve Scheib play 'Bellona, Destroyer of Cities,' and I ran into Peter [Brook]," he said, referring to the renowned British film and theater director who immigrated to Paris in the mid-'70s, where he created the International Centre for Theatre Research, currently based in the Bouffes du Nord Theatre.

"Peter was showing 'The Sonnet' with Natasha Perry [Brook's wife] and Michael Pennington here," Nadylam said, alluding to "Love is My Sin," an experimental theater piece of 31 William Shakespeare sonnets directed and produced by Brook.

The legendary director said to Nadylam: "William, why don't you come and give me a hand? I'm doing this workshop at Juilliard tomorrow." Nadylam recalled, "I said OK...what is it? He said, '"The Flute,"' and I said OK. So there I am, willing to help him on this play called 'The Flute'-mind you, I don't know which flute he is talking about, but it was OK!"

Upon arrival at Juilliard the following day, Nady lam got it when he saw the group of singers. He discovered the flute was "A Magic Flute," an adaptation of Mozart's opera, "The Magic Flute." "It was only then that I realized he wanted me to work with the singers in regard to movement for their bodies." A few days later, Brook invited him to "come and flesh out" the project in Paris and go on tour with the production.

"I did not want to go to Paris at the moment," Nadylam disclosed. "My desire was to mingle more with the New York scene. I mean, I met such great people-not many, but great people-and I wanted to stay close to those new brothers and sisters."

However, for Nadylam, it was about loyalty, caring and giving back. "I've worked with Peter. He is a very respectable man. He has given me some of my best roles," he shared. Among these was his lead in the stage production of "Hamlet," which opened in Paris in 2001 and toured worldwide for nearly two years.

Consequently, Nadylam embraced Brook's project, which he felt the universe was using to test him by presenting this adventure at that particular time. From the outset, Nadylam knew that he "would not be in the lead role, but on the periphery" of the show, as the Spiritual Guide who serves as the narrator of the opera. In addition, he would also be assisting with the production offstage.

"This was not about me shining on stage, it was about the others," Nadylam said. "I put my ego aside to help Peter on his project by being of use to someone I love and respected."

And what a journey. After performances in several European cities, "A Magic Flute" opened to great reviews in New York as part of the 2011 Lincoln Center Theater Festival, which ran July 5-10.

"It was very fulfilling because I have developed a very beautiful relationship with the different singers," Nadylam shared. "I feel that I've helped to make someone shine, to help them find the strength in themselves and the resources they needed for endurance on and offstage. This really made me happy."

At the same time, Nadylam was also on the receiving end of this education. "I am always learning from Peter-trying to understand the way he directs, how to keep the group together. For Peter, when you are directing a group like this, it is not only efficiency in the acting or the results on the stage-he is very much interested in the human aspect, in what's developing between humans on stage," Nadylam revealed. "I have a great interest in that. To get the most out of all of these lessons, I had put my ego aside."

In burying his ego during his time of challenge, Nadylam was able to stand tall. And in keeping with the law of the universe, it has paid off tenfold. In January 2012, Nadylam will be starring in Peter Brook's new stage play set in South Africa.

We are honored to have Mr. William Nadylam, who is currently on tour in Europe with "A Magic Flute," as the Cycle 7 host of "Africa Sings!"