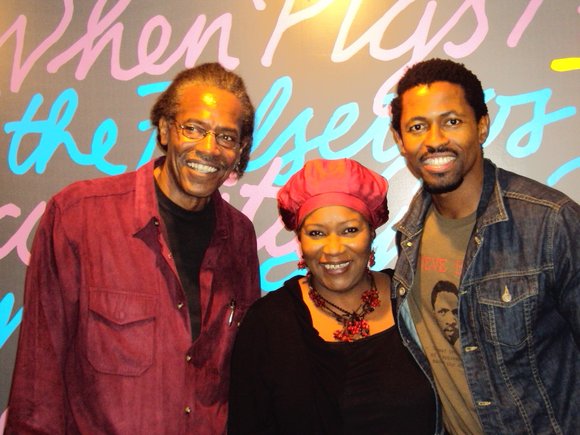 The brutal season in the Congo continues to look very bleak. As such we proceed with our second in our series of the "Africa Sings!!!" Cycle 6 fall/winter edition, which is co-hosted by Kanda Bongo Man, the legendary Congolese soukous singer who will be in New York City mid-month to promote his fantastic new CD "Kanda Bongo Man: Non-Stop Feeling" (TP Productions, 2010).

At the same time, Kanda will be the guest speaker at various organizations during Congo Week, October 17-23, to discuss the horrific crime being committed against hundreds of citizens in the Democratic Republic of the Congo. These vicious offenses against babies, children, women and men are insanely horrendous, running the gamut of rape and torture to murder. Since July of this year, there have been more than 500 women, children and babies, some as young as 1 month old who have been raped. In addition, since 1996, millions have lost their lives. Kanda will address these issues.

According to the website of Maurice Carney's Washington, D.C.-based organization, Friends of the Congo (http://www.friendsofthecongo.org ): "The Congo is the greatest humanitarian crisis in the world today, where nearly 6 million people have died since 1996, half of them children under 5 years old."

Further information on the website reveals that the United Nations has called the battle in the Congo the most fatalistic since World War II. Despite this knowledge and the fact that "45,000 people are dying each month," there is "hardly anything said about it in the media"..."in the age of the Internet."

Consequently the second annual Congo Week, a global student and grassroots program, will be taking place from October 17 to 23 to call attention to the plight of the Congolese, publicize the ongoing criminal assaults on innocent citizens of this nation and take a solidarity stand with the people of the Democratic Republic of the Congo. (For more information, please visit http://www.friendsofthecongo.org.)

Carney was one of the prolific featured speakers last month at the Rico Workshop Productions Harlem community event at the Schomburg for a pre-production launch of Aime Cesaire's powerful play "A Season in the Congo."

The evening, which was sponsored by the Martinique Promotions Bureau, also featured Muriel Wiltord, director of the Americas, as another of the brilliant guest speakers. Wiltord discussed various aspects of the late Aime Cesair, the acclaimed Martinican poet, playwright, statesman and co-conceiver of the Negritude Movement. As a relative of Cesair, she also shared personal revelations and intimacies with the audience.

Carney spoke about the rape of the Congolese people, who have had a horrific history of victimization dating back to the 19th century, when, from 1885 to 1908, the nation was ruled as if it was the private estate of King Leopold II of Belgium. During this period, an estimated 10 to 15 million Congolese were slaughtered to facilitate his greed and enrichment.

This rape continues today for the natural resources of the 132,047-square-mile country.

"If you look at the Congo, it is strategically positioned" Carney said, referring to the nation as "the heart of Africa."

Its major waterway, the Congo River, is the second longest in Africa, and the country is rich with an abundance of natural resources that includes cobalt, copper and coltan, the abbreviated form for two minerals, columbite and tantalite.

Eighty percent of the world's coltan, which is used in most electronic apparatus, including cell phones, comes from the Congo, where according to Carney, "Eighty percent of the population in the Congo live on 30 cents a day or less [or $100 a year], while billions of dollars are going out the back door and into the pockets of the mining companies."

The primary exploiters of coltan in the Congo are Rwanda, Uganda and Burindi armed rebels and foreign forces who get the coltan illegally to sell to multi-national foreign corporations, which, according to the United Nations, are " the engine of the conflict in the Democratic Republic of the Congo." In the process, these radicals intimidate, rape and kill innocent, defenseless Congolese people.

Carney also pointed out, "$80 billion have been allocated to develop energy" throughout Africa.

Again, the immense forest resources in the Congo, which has the world's second largest rainforest, looms at the forefront of an explosive energy war where the indigenous people who depend on the forests are the most vulnerable.

"This is why Lumumba was assassinated," Carney declared, referring to the first prime minister of the Congo, who was elected when the nation that had been colonized by Belgium from 1908 gained its independence on June 30, 1960. "He [Lumumba] said he wanted to control the wealth and share it with Africa...Eisenhower said he was a mad dog and needed to be liquidated."

To commemorate the 50th anniversary of the independence of the Democratic Republic of Congo, Rico Productions, producers Jackie Jeffries and Rico Speights, presents "A Season in the Congo," written by Aime Cesaire and directed by A. Tico Speight. The production, which tells the story of Lumumba's vision for the Congo during its first year of independence, opened on September 30 and will run through October 17 at the Lion Theatre, 410 West 42nd Street in New York City.

In the hands of Speight, Cesaire's classic "A Season in the Congo" merges the mediums of film and theater with Cesaire's harmonic and cinematic narrative, realized by the means of projected archival footage and HD video augmented by expressive soundscapes and choreography.

Cesaire's "Season..." is a remarkable and intriguing work, steeped in history, brilliant in scope, with rich characters displaying every type of human trait compounded by distortions, interpretations and a multitude emotions, providing excellent drama for great theater. The circumstances, occurrences and tragedy that mark the first year of the Congo's independence 50 years ago serves to give a slant on some of the significant issues that are occurring in the Congo today.

Similar to the millions of the Congolese who were sacrificed under Leopold II's reign of terror to make him rich, like Lumumba, who was sacrificed for wanting Africans to control their own wealth and for the millions today who, since 1996, have been sacrificed to fuel the current computer technology age, yet again in 2010, this season in the Congo continues to be one of great human sacrifice.