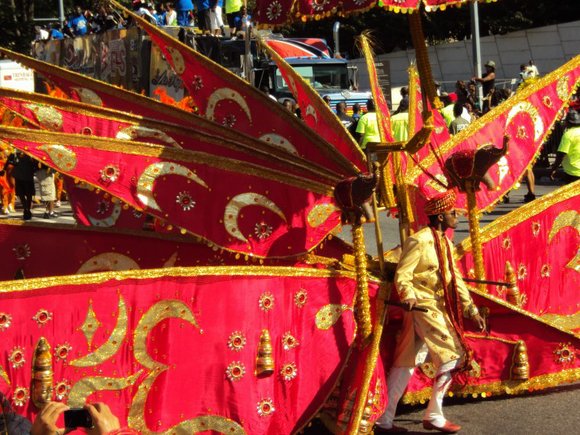 What a weekend! Yes! What an absolutely magical long weekend for the 43rd West Indian American Day Carnival Association's (WIADCA) five-day festival, which delivered in every area of its 2010 "Bridging Cultures" program. Everything was a dazzling dream. The artists were supreme. The steel orchestras were enchanting. The Carnival Mas players were superbly spectacular or sensationally scandalous. Your choice. And the weather--absolutely divine. The setting for all of this was Brooklyn, the center stage for the biggest, boldest, imaginative street theatre in the U.S.A.

The lead up to Carnival started on Thursday (September 2) with the "Caribbean Peoples Unite for Haiti" benefit concert, where headliners David Rudder and Freddie McGregor rocked the stage on the grounds behind the Brooklyn Museum at 900 Washington Avenue. It continued on Friday with the "Stay in School" Cultural Concert, with a new generation of Caribbean talent, and later at Brass Fest where headliner Machel Montano drove the crowd of 20- to 35-year-olds into a feverishly frenzied craze.

Next up, on Saturday, was the adorable Junior Carnival for the children, with various bands playing Mas, having fun and trying to win the coveted 2010 Junior Queen and King of the Band titles. On Saturday evening, a multi-generational crowd packed Panorama for the Steel Orchestra show of shows. Here the reigning Sonatas Steel Orchestra defended their 2009 title, with Adlib placing second and Casym third.

The colorful Dimanche Gras (Grand Sunday) opened with Eintou Pearl Springer, the Poet Laureate of Trinidad and Tobago, performing the opening Carnival Mas invocation by inviting "the ancestors of Mas" to be present. She appealed to the ancestors to speak to the Orishas: "Ask Eshu, opener of the road, to open doors for us to have a successful Carnival." Then she asked for additional assistance from "the warrior power of the Egunguns to fight this Mas, to help to fight for justice for everyone in our lives." In closing, Springer prayed to God, asking for "a safe and healthy Carnival, as we give praise for the health and talent of our revelers." Again, Springer's talented and adorable twin grandsons, Shomari and Ajani, accompanied her on the djembe drums.

Then the King and Queen of the band competitions took over the stage, turning it into a canvas of every color under the sky, as all the contestants displayed their costume while performing their choreographed shiff-shiff movement. Amongst the junior Mas bands were Royal Journey, God of Rainforest, Chutney Bacchanal, and Rivers of Life.

The adult bands included Colors of Season, Pieces of a Dream, Rivers of Life, Season Explosions, the Bird and the Mist of Winter. Along with specially arranged tunes for each band, the Rhythm Masters, a fierce rhythm section, turned it out.

Making its debut on the evening's program was the theatrical production "Kambule," which pays tribute to "the 1881 stick fighters and people from the communities in an around Port of Spain, Trinidad, who confronted the British militia to ensure the continuation of Carnival celebration." Performed by the Positive Force dance ensemble, Michael Maxwell, artistic director, and the Omalay Dance Theatre, Valerie McLeod-Katz, founder/Artistic Director, their special guest for this segment was Eintou Pearl Springer. Her grandsons Shomari and Ajani on djembe drums were part of the percussionists who accompanied the theatrical group. The brilliant drummer Marcus Williams also did his thing ever so beautifully.