'Ease on Down the Road' to see 'The Wiz' 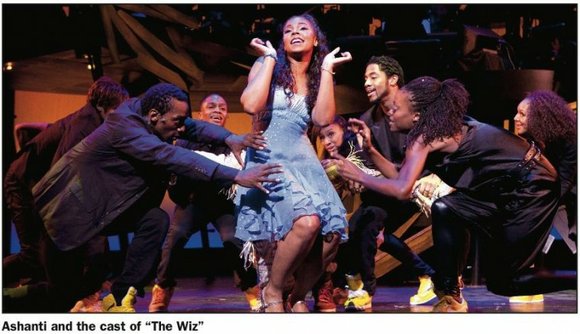 'Ease on Down the Road' to see 'The Wiz'

"The Wiz" is absolutely wonderful. It's exciting to watch and the all-star cast is amazing. Ashanti and Orlando Jones, both making their stage debuts, are marvelous. Ashanti's vocals overall, especially on "Home," are incredible. While everyone knows that she made a name for herself as a recording artist, you will also see that she will now make a name for herself as a musical theater performer. And Jones gives a very amusing turn as the Wiz.

The rest of the all-star leads include Tichina Arnold as Evillene, the wicked queen, and Dawnn Lewis as Addaperle, the Good Witch of the North--a role she makes hilarious. Tony Award-winner for "The Color Purple," LaChanze is captivating as Glinda, the Good Witch of the South. Her voice is absolutely stunning and powerful as she performs "Believe in Yourself."

Joshua Henry plays the Tinman and has a wonderful, gripping singing voice and dances beautifully. Christian Dante White is absolutely charming as the Scarecrow. His singing and dancing are marvelous. James Monroe Iglehart is the Cowardly Lion, and he is fantastic. He's funny, his singing voice is amazing and he, like White and Henry, just seems to have fun with his role, which meant that the packed house at New York City Center on West 55th Street also had a marvelous time.

I took my 6-year-old daughter Jasmine and she couldn't stop smiling and laughing. The production has many funny moments, and there were times that she and I were in awe as we watched the brilliant and abundant choreography.

Choreographer Andy Blankenbuehler and director Thomas Kail have created a very original production of "The Wiz." The staging of various scenes is incredibly unique and original. For example, dancing is used in new ways to represent things, such as the twister landing on the farm.

I won't share any further specifics because I want you to experience this production firsthand. This musical is successful on all levels. The singing and dancing of the ensemble cast is phenomenal, and the use of a chorus is wonderful--their voices soar in the theater.

The creative team behind this show should be acknowledged for putting together a production that is not only amazing to experience, but also something that is exciting for the entire family to watch. Between Blanken-buehler, Kail, Alex Lacamoire, the music director, Paul Tazewell, the costume designer, Ken Billington, the lighting designer, Acme Sound Partners, sound designers, and Cookie Jordan, the makeup director, "The Wiz," with a book by William F. Brown and music and lyrics by Charlie Smalls, is a theatrical musical production you will long remember. This production is sponsored by BET Networks.

But you won't have much time to savor it because this show only has a limited engagement through July 5. So go by train, bus or the street, but "Ease on Down the Road" and see a delightful production that succeeds on every level!