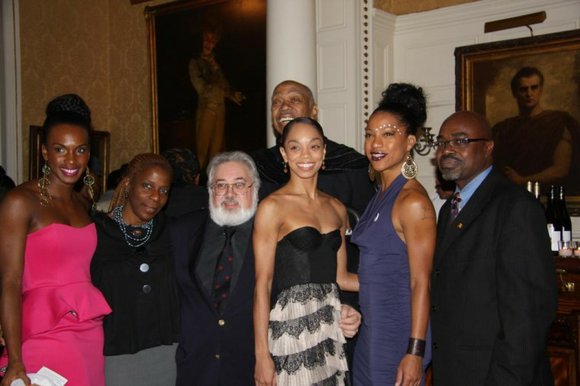 Do you believe in magic? I do, and you would too if you hung around with the great "wiz" Geoffrey Holder, master of the arts.

As the esteemed patriarch of the International Caribbean American Diaspora Film Theatre & Literacy Festival (ICAD-FTL), he choreographed a spectacular move for the organization's fall-winter 2010 ICAD Film Salon Series, which kicked off last Monday at the Players, 16 Gramercy Park South in New York City.

It started last month when Holder arranged a luncheon meeting with John Martello, executive director of the Players, and I, the executive director of the Caribbean multi-disciplinary cultural organization. Over lunch, Martello invited ICAD-FTL to screen its 2010 fall film series at the Players, the stunning Greek revival townhouse that faces the picturesque and serene Gramercy Park.

Founded in 1888 by Edwin Booth, America's renowned Shakespearean actor, and others such as Mark Twain, the purpose of the Players, the first American "gentleman's club, is for "the promotion of social intercourse between members of the dramatic profession and the kindred professions of literature, painting, architecture, sculpture and music, law and medicine, and the patrons of the arts."

Today, professional men and women from diverse backgrounds and professions in the arts, business and commerce enjoy the Players, which houses the Hampden-Booth Theater Library, which is in keeping with Booth's wish to create "a library relating especially to the history of the American stage and the preservation of pictures, bills of the play, photographs and curiosities connected with such history."

The Players offers the architectural elegance and comfort of another era in its handsome, spacious building, which was designed for functionality and comfort. Its staff boasts a distinctive spirit of professionalism, cordiality and warmth. From Raymonde, who took care of everything from testing our film to ensuring the needs of our sponsors, to our wonderful bartender, the service from all the staff was absolutely wonderful. In effect, the shared theme of the evening was that of brilliant people, fine wine and delicious appetizers--courtesy of the Martinique Promotion, Cafe St. Germaine and Madame Rinella Harty-Bolt--and wonderful, enlightening conversations.

This is the magical place that our guests found themselves in last Monday as they were greeted by John Martello, Geoffrey Holder, the Martinique Tourist Board team and I, who graciously welcomed our guests to the world of the Players.

Yes, this was the wonderful setting for our salon film series that Dalton Narine, a film director-producer who flew in from Miami, was graciously welcomed into for the screening of his award-winning, groundbreaking film "MAS MAN: Trinidad Carnival Artist" (King Carnival Productions Ltd., 2009).

"MAS MAN," according to Mr. Narine "is neither story nor biography, but a portrait of the Trinity Cross and Emmy Award-winning designer [Guggenheim Fellowship recipient Peter Minshall] who compiled mas bands across three decades and served as an Emmy Award-winning artistic director for the Olympic Games in Barcelona, Atlanta and Salt Lake City."

Narine's credits include 14 documentaries that form a significant and unparalleled collection of festival films and made-for-television programs. Amongst them are "Masquerade," "Streets of Colour," "The Minshall Trilogy," "Danse Trinidad," "Mas Fever," "Soca Nation," "King of Carnival" and "Panorama, Festival of Pans."

The brilliant, yet humble Narine was elated at the gathering that commenced in the central parlor of the Players and flowed out to the outer sitting room to the right, as well as to the large screening room to the left. In addition to Holder and Martello, he was enthusiastically congratulated by the special celebrity guests from "Fela!" The talented Caribbean beauties Nicole Chantal de Weever, Elasea Douglas and Oneika Phillips warmly embraced and applauded Narine and posed for photos with him.

The Grenadian stunner Oneika was surprised by her consul general, the Honorable Derek James of the Consulate of Grenada. After James read a piece that I wrote about the triple-threat talent in the NY Amsterdam News suggesting that Oneika be considered as a celebrity ambassador for Grenada, he stopped by upon my request. Judging from his reaction, he got it! A follow-up meeting is being scheduled between the two charismatic Grenadians for further discussion, to which I have also been invited.

Not to be left out, the fabulous, Aruban-born Pearl Baeina, a dynamic photographer with Grenadian ties who recently returned from living in Switzerland, was heartily greeted by the consul general. Another Aruban, the wonderful and popular Ingrid Charles, was also on the scene.

Our other special guest, Jean Alexander, received the International Caribbean American Diaspora Film Theatre & Literary Festival Geoffrey Holder Trinity Awards' Guiding Light for her exemplary role as a leader in the Caribbean community. Alexander is the executive director of the Caribbean Center of New York as well as a board member of the 43-year-old West Indian American Day Carnival Association.

The International Caribbean American Diaspora Film Theatre and Literary Festival thanks everyone for their support. Great appreciation and acknowledgements go to the two wonderful magicians: the clever, funny and gracious Mr. John Martello and our dear friend, the inimitable Mr. Geoffrey Holder.

The "Caribbean Lingo!" series pays tribute to Caribbean Diaspora artists and art forms of the highest caliber. To contact us, please e-mail our team at Caribbeanlingo@gmail.com.