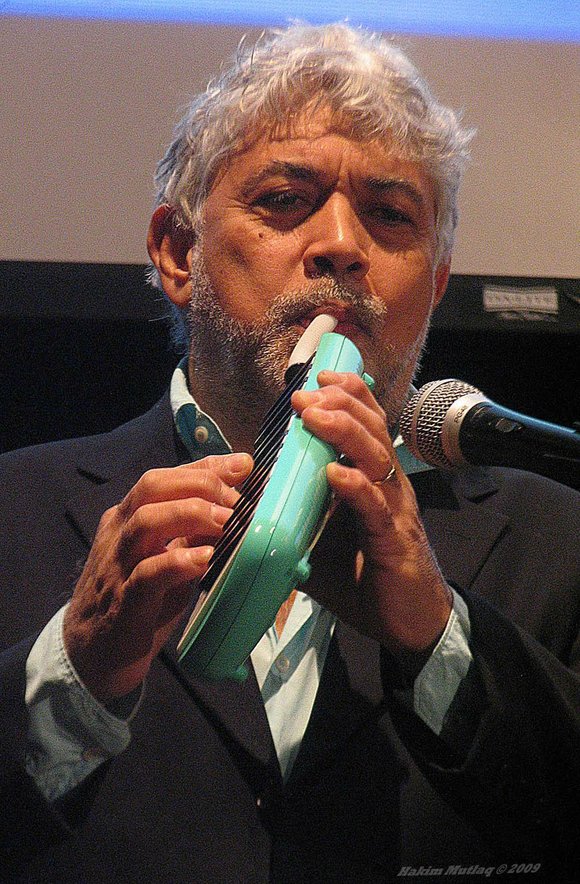 The takeoff was sweet, man. Real sweet. Looking dapper in black slacks, a white shirt, a vest with distinctive black and white geometric designs, and an ecru-colored jacket set off by a red silk handkerchief, the distinguished looking, silver-haired pianist Monty Alexander immediately took command of the Allen Room at Lincoln Center's Frederick P. Rose Hall last Friday evening. With a sound akin to that of a train whistle emanating from his melodica, signaling "all aboard," Monty Alexander's "Harlem-Kingston Express" smoothly took off on a marvelously entertaining and enlightening, cross-cultural musical excursion, focusing on what he refers to as "Jamaica's calypso, our folk music, which we call Mento."

Skillfully soaring and transcending beyond the Allen Room's signature wall of glass and out into the neon-lit night sky, Mr. Alexander's exhilarating fusion of music transformed the Manhattan skyline into a dreamy landscape. Here, jazz and reggae played, folklore and traditions danced, and New Orleans and Jamaica made love.

Soloing exquisitely on piano at the top of the set, Mr. Alexander was dazzling on a medley of Jamaican and American classics that included "Jamaica Farewell," "Island in the Sun," "Young at Heart" and "Sweet Georgia Brown. The pianist to date has recorded close to 70 albums during his illustrious career, which began as a teenager in Jamaica when he formed his first band, Monty and the Cyclones. Amongst his earliest influences were Louis Armstrong and Nat King Cole, who the young musician first saw when they visited Jamaica, prior to immigrating to the United States in 1961 at the age of 17.

During the Friday evening concert, Mr. Alexander took the audience back to Jamaica in many ways. One was through his stimulating guest, the Jamaican storyteller and poet Ms. Mattie Lou, who gave delightful renditions of the traditional folk songs, "Long Time Gal Me No See You," "Hill and Gully Rider," "What a Saturday Night" and "Linton Market." Dressed in a long, traditional, red and black calico skirt and white bodice, with a matching head tie (head wrap), Ms. Mattie Lou enlightened the capacity-filled venue about the songs, as well as some of the folklore and traditions of her country. Accompanied by the first-rate banjo player Carlton "Blackie" James, who also sang along with Ms. Lou, an excellent young djembe drummer (apologies, as his name was not listed) and Mr. Alexander joining in on the melodica, this segment gave a vivid and enriching depiction of Jamaica's time-honored folkloric expressions.

Switching between Jamaican dialect (broken "French, English and Portuguese") and "standard" English, Mr. Alexander closed this segment by acknowledging writer/poet/comedienne The Hon. Louise Simone Bennett-Coverley (Miss Lou), the great Jamaican cultural folklorist who championed the use of Jamaican dialect (patois) in everyday life, making it acceptable in Jamaica, the Caribbean and throughout the Caribbean Diaspora.

A cultural diplomat in his own right, in 2000, Mr. Alexander was awarded the title of commander of distinction by the government of Jamaica "for outstanding service to his country in his capacity as worldwide music ambassador." This was reflected throughout the evening's performance with the Monty Alexander Trio, featuring the exceptional Mr. Alexander on piano, the superb Hassan JJ Wiggins Shakur on acoustic bass and New Orleans' electrifying Herlin Riley on drums.

After several fantastic numbers, the trio was joined by the horn section, with the Juilliard-trained Trinidadian trumpet dynamo Etienne Charles, the talented Harlem-born Clifton Anderson (trombone) and the gifted Charles Dougherty (tenor saxophone). Adding to the mix were the super talented, cool Jamaican musicians Wayne Armond (guitar and vocals), Glen Browne (bass) and the white-gloved Karl Wright (drums). This hybrid combination was out of this world as the musicians worked their magic.

Mr. Alexander's rendition of Bob Marley's "Could You Be Loved" with Etienne Charles' incredible solo moments was fierce, as was the up-tempo calypso number that followed. At various transitional points throughout the evening, Mr. Alexander's use of the melodica served as a gentle reminder to reinforce this enjoyable and memorable musical journey on the "Harlem to Kingston Express."

In between numbers, Mr. Alexander's spontaneous conversation further added to the musical experience. Focusing on Harlem, he recalled: "I played at Minton's in 1957 when I first came to New York City." Honoring that moment, he swung into Duke Ellington's "Things Ain't What They Used To Be." Another cherished memory induced him to play "Take the 'A' Train."

After sharing that the Jamaican reggae singer Bob Marley also passed through Harlem, as did Marcus Mosiah Garvey, Mr. Alexander paid tribute to the celebrated Jamaican activist with the song "Garvey" by roots reggae legend Burning Spear. With the brilliant arrangement and phenomenal playing of Mr. Alexander, Etienne Charles' fierce trumpet, the congas mobilizing force, and Wayne Arnold's smooth vocals singing the hook "Hold dem Marcus, hold them," as the horn section built to one absolutely powerful, climactic moment, this number was flawless.

Then there were the fascinating impressions of Mr. Alexander singing Louis Armstrong, as well as Nat King Cole's "Sweet Lorraine." He also recounted meeting Frank Sinatra early in his career when he played at "this bar full of gangsters." Laughing, he then went on to play "Fly Me To The Moon."

On a new composition dedicated to the Jamaican track phenom Usain Bolt, the upbeat ska number featured Mr. Alexander on piano and Wiggins Shakur on bass boldly racing against each other, following which Riley, with his inimitable style, rushes in and everything explodes rhythmically as they try to catch up to the world's fastest human being. This number was totally solid, as was the closing "One Love," from Mr. Alexander's 2005 masterpiece album, "Concrete Jungle," a reinterpreted, jazz piano-oriented arrangement of Bob Marley tunes.

Trust me, like the standing ovation bestowed upon the great pianist last Friday evening, somewhere in the heavens, the Honorable Robert Nesta Marley and Honorable Marcus Mosiah Garvey were likewise smiling down and applauding their fellow countryman, the highly esteemed Mr. Monty Alexander.

To contact the "Caribbean Lingo!!!" series, which serves to pay tribute to Caribbean artists and art forms of the highest caliber, please e-mail our team at: Caribbeanlingo@gmail.com.