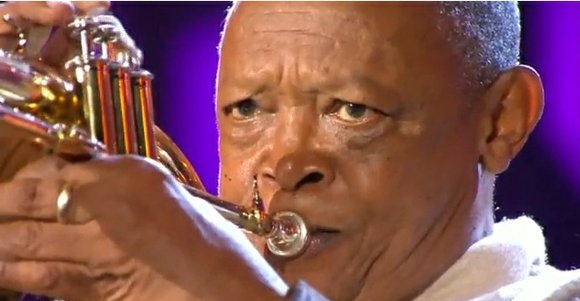 Last Sunday, "Africa Sings!" attended the phenomenal SummerStage concert at Central Park, where the dynamic headliner, Hugh Maskela, the legendary South African musician, performer, composer, producer and activist, had the jam-packed crowd going wild. For almost 90 minutes the iconic artist celebrated for his gift and prowess in bringing the verve and passion of South African music to the world, took over Central Park's main stage wowing the crowd with his powerful weapons of song and dance. What a magical performance.

Seven dynamic performers from South Africa, Mozambique and Zimbabwe, were also featured on the program. Recognized as "the musical voice of a nation's adolescent democracy," the group worked their fiery magic. Their showstopping tunes from their four celebrated albums had everyone moving and grooving.

The Ugandan songstress Somi opened the concert with her sultry blend of African and jazz rhythms. Dressed in a hot pink gown, Somi, who has been compared to the legendary Sarah Vaughn and Miriam Makeba, delivered over and over again, singing in English and three East African languages. Totally exquisite.

The Cesar Award-winning De Bankole, whose credits include "Chocolat," "Otomo," "Night on Earth" and "The Limits of Control," will honor us as the upcoming Cycle 7 host of "Africa Sings!" commencing next week

Later this month he will be journeying to Taipai as an artist-in-residence at the Taipei Artist Village. Davis is the recipient of numerous awards, including the 2010 Andrew W. Mellon/Theatre Communications group-New Generations /Future Collaborations grant, the National Endowment for the Arts / Theatre Communications Group Director Fellow (1988-89), and the Taipei Artist Village Artist in Residence (2007, 2010).

Joining "Africa Sings!" at the afternoon's dynamic concert was our special guests Clinton Turner Davis, the esteemed theater director and educator, and Isaach De Bankole, the celebrated actor and director.

Clinton Turner Davis graciously discussed several aspects of SummerStage and the concert with me in the following interview:

M: Let's talk about SummerStage and what they bring to New York City.

CTD: All of the concerts and the free activities that occur in New York City...makes New York City an even greater destination in the world, and SummerStage is at the top of the list of these places to be and go and hear some of the best artists from around the world. It is interesting, when I was walking into SummerStage, I was awash in memories of the times that I had spent at various performances in the park that were sponsored by SummerStage in all the boroughs. The only one that I had not been to was Staten Island. And then, when I read the brochure and saw all of those things that were happening...I realized just how large the entire SummerStage event had grown. It is such a wonderful use of the resources of the city for the entire population. It's a gem.

M: Would you comment about all the fabulous people at the concert?

CTD: It was such a good time, and then to see all the people...seeing what New York is noted for and seeing the wonderful cross-section of the population of New York was great, and [there were] all ages, from little children to the elderly. It was very heartening to see the area for the disabled...It made them very comfortable and [they] treated them with tremendous deference. I could see on the faces of all those patrons who were disabled that they were respected and enjoying themselves, and particularly that they had not been forgotten. It was a very, very enjoyable day for me...here at the kickoff for the summer performance season.

M: And the sponsors. Did you see the canopies with the different sponsors?

CTD: I saw some of them. I remember the JetBlue one and I saw a couple of others, but by the time I was focusing on them, the crowd had gotten so large that they were standing up at that point. (Laughter) It was standing-room-only at a SummerStage.

M: And your thoughts about the environment. The foliage. The greenery...

CTD: We were blessed with a very beautiful summer day. Not too hot. Very little humidity. I think just being around nature in Central Park was an amazing moment, and what really was fascinating is that...the number of butterflies that were flying around and that were landing on people and staying there for minutes at a time...it was a peaceful place and so relaxing.