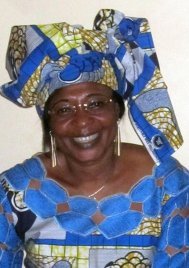 Dec. 6 (GIN) - A "Nobel prize" for activists was awarded this week to Jacqueline Moudeina, a fearless human rights lawyer from the north African nation of Chad.

Moudeina was commended "for her tireless efforts at great personal risk to win justice for the victims of the former dictatorship in Chad and to increase awareness and observance of human rights in Africa." The Right Livelihood Award, also known as the Alternative Nobel Prize, honors and supports those "offering practical and exemplary answers to the most urgent challenges facing us today".

Moudeina's signature work has been her effort to bring former Chadian President Hissene Habre to justice. He left Chad over 20 years ago to live a life of luxury in Senegal. It is estimated that 40,000 political killings took place under this watch.

In her acceptance speech at the ceremony this week, Moudeina said: "I cannot bear injustice...The fight against impunity which I lead and which I will win by the Grace of God, is the result of my decision to take the side of those who suffer and whose cries continue to be ignored by the decision makers."

Awarded with Moudeina were: Huang Ming of China, GRAIN International and Ina May Gaskin of the U.S. for her work advocating safe, woman-centered childbirth methods.