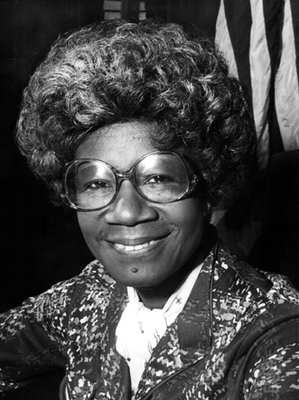 Last week, Brooklyn College and the Shirley Chisholm Project organized for the 40th anniversary of the congresswoman's historic run for the presidency.

In 1946, Shirley Chisholm graduated from Brooklyn College with a degree in sociology. She became an educator and community activist before being elected to the New York State Assembly in 1964. In 1968, she ran for New York's 12th congressional district seat and became the first African-American woman elected to the U.S. Congress. The author of "Unbought and Unbossed," in 1972 Chisholm became the first African-American woman to run for the Democratic presidential nomination.

This year, Anita Hill, professor of social policy, law and women's studies at Brandeis University, was the person called to speak at the prestigious event. She is the author of "Speaking Truth to Power," which discusses her experience during the confirmation hearings of U.S. Supreme Court Justice Clarence Thomas. Hill has written widely about issues of race and gender and has been a regular television commentator on these and other topics.

Hill said it was important to highlight the legacy of Shirley Chisholm because "so many things she said are still relevant today." She told the audience of students and faculty, "Improving the life of women and communities is the basis of everything."

This is, in fact, the central topic of her new book, "Reimagining equality," which she discussed during her lecture. In the book, she examines the housing foreclosure crisis, urban neglect and new migration patterns as examples of what she calls a "crisis of home."

Using the evolution of American housing to "reimagine equality" and focusing on gender and race, Hill believes "equality has to be a lived experience, and nothing speaks to that more than the place we call home."

She also stated that 65 percent of the victims of the foreclosure crisis were African-American, Latinos and Asian, and noticed there is a disproportional impact on single women, particularly those of color, because they were the first targeted by the affordable subprime credits.

She explained how buying a home is a symbol of accomplishment. "So many people find their way buying a home, and the subprime credit was at that time the best opportunity to get one despite their low income. It allowed most of the single women to start [making] plans, that is why they were the first hit by this crisis."

According to Hill, this is directly linked to a "crisis of home," because "today, people are looking for affordable and secure places to live, yet no one can provide it for them."

She added, "This home crisis is much more fundamental than the market crisis."

A major exhibit will open in late January featuring Chisholm's documents and political campaign artifacts from the Chisholm Archive at the Brooklyn College Library. In March, Brooklyn College will host a two-day conference with academics, activists and elected officials to reflect on the late congresswoman's legacy. Planning is under way for activities throughout 2012 to commemorate Chisholm's presidential candidacy.