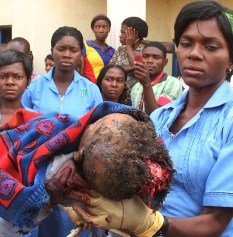 Dec. 27 (GIN) -Amidst the grieving for victims of Tuesday's bombing of a Christmas mass by an anti-government Islamic sect, Nigerian religious and political leaders begged for calm between the country's major religious groups which have been at odds before.

"We are Nigerians. I don't see any major conflict between the Christian community and Muslim community," said the president's national security advisor, Owoye Azazi.

"Retaliation is not the answer, because if you retaliate, at what point will it end? Nigeria must survive as a nation."

The Sultan of Sokoto, Muhammad Sa'ad Abubakar, told a press conference: "I want to assure all Nigerians that there is no conflict between Muslims and Christians, between Islam and Christianity,"

The Islamist group Boko Haram, whose own leader and dozens of followers were massacred by the government in 2009, took credit for the Christmas attacks that killed 40 people, 35 of them at the church near Abuja.

Elsewhere in Nigeria, a massive oil slick has been making its way to the Nigerian coast, threatening local wildlife along the shore. Much of the published information about the spill - one of the largest in a decade - comes from the company itself, Royal Dutch Shell.

Nigeria's National Oil Spill Detection and Response Agency says the spill could be three times as large as company estimates. Four months ago, the United Nations said it would take 30 years and around $1 billion for a small section of the Niger delta to recover from environmental damage caused by Shell and other companies.