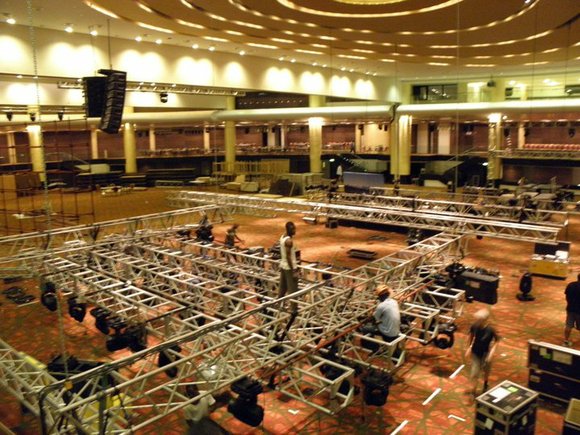 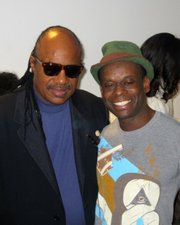 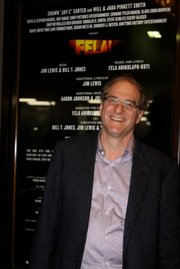 "Fela!" is a dazzling, sizzling showstopper. From its triple Tony award-winning rave Broadway run at the Eugene O'Neill Theatre in 2010 to its current 2011 international and national tour, this celebrated musical about Fela Anikulapo Kuti, the Nigerian Afrobeat king and human rights activist, keeps on keeping on. Yeah, yeah, all around the world from Broadway to Africa, from Europe to its current United States tour, "Fela!" is what entertainment is all about.

"This was a very eventful year," said Stephen Hendel, "Fela's!" lead producer, from his New York office on Tuesday. Hendel and his wife, Ruth Hendel, co-producer of the talk-of-the-nation show, had recently returned from the Dec. 14 Los Angeles premiere of "Fela!" at the Ahmanson Theatre, where the show garnered rave reviews.

Starring the Tony-nominated Sahr Ngaujah as Fela, the international cast was comprised of members of the Broadway and U.K. companies. Joining in the applause for the show were celebrities that included Stevie Wonder, Nas, Debbie Allen, CCH Pounder, Leslie Ann Warren, Byron Batista and a host of others.

Reflecting back to the final day of the Broadway run of almost a year ago, Hendel marveled, "The last show was amazing!" After closing on Broadway on Jan. 2, the Bill T. Jones-directed musical that boasted celebrity producers Shawn "Jay-Z" Carter and Will and Jada Pinkett Smith moved on to uncharted grounds: Lagos, Nigeria, Fela Kuti's homeland.

History was made April 20 when "Fela!" opened at the Expo Centre in Eko Hotel on Victoria Island in Lagos. The "Fela!" cast, starring Ngaujah as the Nigerian icon, set a world record as the first Broadway cast to perform in Africa. Presented by Broken Shackles, a Nigerian production company and the Lagos state government, the "Fela!" company and crew-a total of over 80 Americans-as well as tons of equipment came over from New York to Lagos for the show's superlative run.

Hendel shared some of the many climactic moments of the historical, edutainment journey that brought out everyone-rich and poor, Christian and Muslim, educators, businessmen and women, artists, government officials, celebrities, gangsters.

Owned and managed by Kuti's two eldest children, Femi and Yeni, the New Afrika Shrine is a replica of Kuti's original club from the '70s, where the multi-instrumentalist/composer and political revolutionary performed and conducted many aspects of his business.

With Fela Kuti's sacred blessing, the musical departed Nigeria for Amsterdam, the first stop on the "Fela!" world tour. Opening on June 10 with raves at the Royal Theatre Carre, the show continued on to London, where it opened July 20 at the Sadlers Wells Theatre. According to Amaali, an Africa Sings! London colleague, "Fela!" became the must-see show of the summer.

With fall, "Fela!" was back in the United States. Opening in Washington, D.C., at the Shakespeare Theatre Company's Sidney Harman Hall (Sept.13-Oct. 9), the show continued to Atlanta at the Civic Center (Oct. 11-16) and New Haven at the Shubert Theatre (Oct. 20-23), before heading to Canada for its Toronto engagement at the Canon Theatre (Oct. 25-Nov. 6). Africa Sings! Toronto colleague attorney Emmanuel Irish raved about "Fela!" in an email.

During the run, Rita Marley, Jamaica's first lady of reggae, was spotted in the audience. According to Hendel, "Marley came backstage and met the cast." This can only mean that she loved the show!

Back in the United States, "Fela!" wowed San Francisco's Curran Theatre (Nov. 25-Dec 11). "It was an outstanding experience," Hendel shared. "We received a proclamation from the Mayor's Office by the Board of Education." Yep, "Fela!" currently in Los Angeles through Jan. 22, 2012, is the show everyone is talking about.

"The reaction has been fantastic. And all the reviews are amazing," Hendel exclaimed. "No matter where we were, at the beginning of the show the audiences might have been timid and questioning. However, by the end of every performance they are standing up and yelling with enthusiasm and excitement. The two and a half hours always bring the audience to a heightened state of collective exhilaration."

Gearing up for 2012, the "Fela!" tour returns to the Washington, D.C., area, opening at the Warner Theater on Jan. 24, Philadelphia's Academy of Music on March 20 and to Chicago at the Oriental Theatre on March 28, to mention a few.

In the musical, Fela tells his chorus of queens that his first name means "he who shines with greatness." On Broadway, New Yorkers agreed that "Fela!" shone with greatness. Now with the "Fela!" world tour, the world heartily agrees. Yeah yeah!

For more information, check out www.felaonbroadway.com.