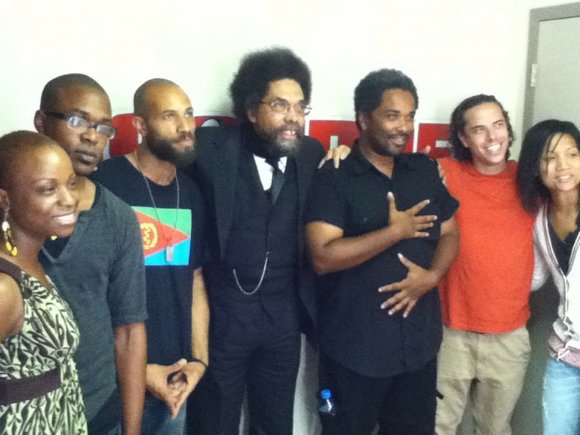 Allow your soulful imagination to visualize Dr. W.E.B. DuBois joining Jelly Roll Morton on a comfortable stage in 1915 for Morton's "Jelly Roll Blues," six years after Dubois's "The Souls of Black Folk" was published and distributed in Harlem.

Or, better yet, imagine Dr. DuBois in 1935 with Duke Ellington, shortly before "Black Reconstruction" was published, and he and the Duke are performing "In a Sentimental Mood." This was the mystique of the evening at SOB's last Tuesday evening when Dr. Cornel West joined the Cornel West Theory on stage for The Source magazine's summer Ghetto Metal series.

The Cornel West Theory is a six-member band from Washington, D.C., whose second album, "The Shape of Hip-Hop to Come," which fuses hip-hop and spoken word, will be released on July 19. The band formed in 2004 and is based on the writings and philosophies of West. After receiving West's blessings for the utilization of his name, the prolific author-professor-griot appeared on both of the group's albums.

Prior to the performance before a packed audience, the band and West visited The Source headquarters, where they spoke with editors and publisher attorney L. Londell McMillan about the upcoming album, the state of hip-hop music and, naturally, the state of Black America. West stated, "For me, when I think about music, I think about John Coltrane, Curtis Mayfield, Nina Simone and the late, great Gil Scott-Heron, and the notion of there being in the younger generation conscious, courageous, prophetic and progressive artists who wanted to keep that legacy alive...and that's what you have in the Cornel West Theory...that sets them apart from every other hip-hop group in America."