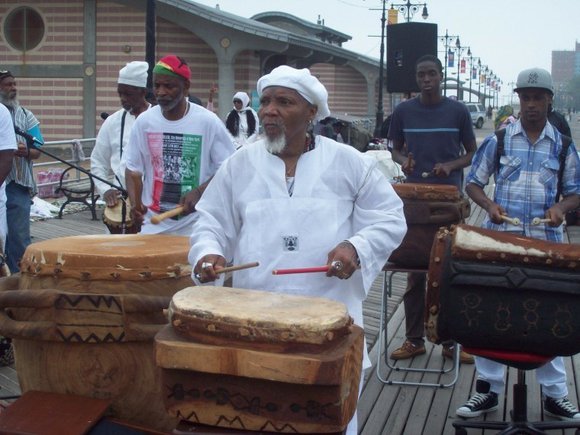 Dozens of people gathered on the boardwalk on Coney Island this past Saturday to pay tribute to enslaved Africans who died during the Transatlantic Slave Trade at the 22nd annual Tribute to Our Ancestors of the Middle Passage ceremony.

The ceremony took place on the boardwalk at West 16th Street on Coney Island where some of the earliest slave ships of people who were captured in Africa and brought to America docked. Saturday's ceremony was sponsored by Akeem Productions and the People of the Sun Middle Passage Collective in conjunction with the Medgar Evers College Student Government Association.

The celebration culminated at sundown with the final ancestral offering, during which drummers led the participants to the water's edge to place flowers in the Atlantic Ocean in memory of the Africans who died on the trip to America. The Atlantic is believed to be the largest African burial ground in the world.

"We are here remembering these ancestors," said Akeem, who put the event together. "Some of the first slaves came right here. We not only talk about the ancestors of the Middle Passage but also recent ancestors. We do this with music, poetry and drumming all day long. The drumming is a big part to the celebration. Whatever is happening, you know by the drum-it's key to the celebration."