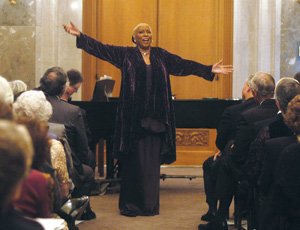 "It was heartwarming and exciting," she said, "to be amongst people like Gregory Hopkins, who I've known all these years, and to be in Harlem itself!"

"I had had a tremendously rich background. I went to a rural Black school in Atlanta, Texas, where my father was the principal and my mother drove the bus." Her mother later became a teacher. Conrad had an exemplary rural musical education that revolved around family, school and church.

"My brother Denard was truly a musical genius. He could play anything on piano in any key. He taught me so much about music. He taught me Beethoven's 'Mount of Olives' aria in one night."

As the film details, Conrad integrated the undergraduate school of University of Texas.

Evidencing musical maturity, she landed the lead role in their 1957 opera production, "Dido and Aeneas," opposite a white leading man. Word spread, pressure (e.g., intimidation, hate mail, effigies of university personnel) intensified and shamefully the Texas Legislature advised the university president to remove her from the cast. She was replaced; it became national news.

Amid outrage, some help: Eleanor Roosevelt and musician-activist Harry Belafonte sponsored her next moves. Belafonte offered to pay for tuition at another school, but she heroically declined.

She graduated in 1959. In 1985 her grace and sacrifice were formally acknowledged by the university with the founding of the Barbara Smith Conrad Endowed Presidential Scholarship in Fine Arts.

Patricia Sage, Conrad's long-time accompanist, said, "They apologized in writing, but then they made it an actuality when they took it to Legislature, to the politicians."

Conrad at the Texas Legislature is a powerful scene in the film. She credits director Mat Hames, who highlights her self-reliance, visually rooting her like a tree. "You can't pass on a legacy for anything you don't have a connection to," she says.

In the Metropolitan Opera's "Porgy and Bess," alongside Simon Estes or Grace Bumbry or portraying Marian Anderson at the Lincoln Memorial in the movie, "Eleanor and Franklin: the White House Years," Conrad meets the grand moments, but also has the patience and awareness for work on breath and body.

"You got to have strength, air pull, an understanding of how this body works from the bottom of your feet, hips, backbones and above. If those are not really stretching and participating, you're not going to get first-class anything," she tells.

"I worked with Mr. J. at his house for seven years," she says, referring to composer-arranger Hall Johnson. "First time we met, I brought him some yellow roses from Texas."

Starting to exchange a dried flower in his vase for her fresh ones, he exclaimed, "What you doin' with that flower?! Don't you know that flower is alive?" It was just as he heard life in the old plantation songs of his mother Alice, a former slave.