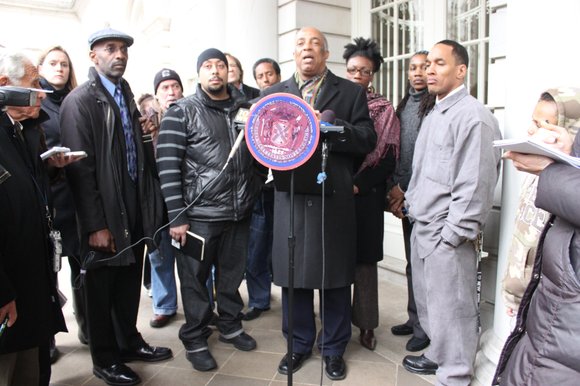 The Central Park Jogger case has hit the headlines again.

On Tuesday, Raymond Santana, Khary Wise, two of the five young men falsely accused and wrongfully imprisoned in the notorious case gathered on the steps of City Hall to demand that the city address the issue of their compensation.

"We call on Mayor Bloomberg to authorize the immediate settlement of this case," said Roger Wareham, one of the lawyers in the case. "We call on the City Council to hold hearings on the city's refusal to settle this matter. And, as our history demonstrates, we will be in the streets to mobilize our community to create whatever pressure is necessary to bring long overdue justice to the Central Park 5 and their families. Almost ten years ago next April, Councilman Charles Barron introduced a resolution in the chambers at City Hall to that end."

While jogging in Central Park on April 19, 1989, Trisha Meili was raped and beaten. Five Harlem teens--Raymond Santana, Khary Wise, Antron McCray, Kevin Richardson and Yusef Salaam--were charged and tried for the crime, first in the media and eventually in court, where they were convicted of the assault. The case had current so-called potential presidential candidate Donald Trump taking out full-page ads in New York City papers demanding the death penalty for the young men.

In 2002, the convictions were overturned when DNA evidence and a confession proved that Matias Reyes committed the crime alone.

The evidence proved what the the teens--now men--had always maintained: they were not guilty of the assault. In the wake of the subsequent civil suit, supporters, families and attorneys for the exonerated men demanded that the city not put them through another trial, but rather step up and compensate them for their unlawful imprisonment.

Santana said, "Today marks 22 years since Kharey, Yusef, Kevin, Antron and myself were taken from our homes, robbed of our youth, and given labels of 'rapists,' 'monsters,' 'animals' and 'wolf pack.'

"We come here every year. We stand on these steps. We demand justice," he continued. "The media does a small article and puts it in the back of the paper. TV doesn't even acknowledge us. Where is our justice? Twenty-two years is a very long time. We have lost family members. We have lost time. We have lost our foundations.

"We have difficulties when it comes to functioning on a higher level as productive individuals because we never had the opportunity to grow naturally, make mistakes, live life. We didn't have the chances to become lawyers, doctors, police officers, firefighters or Duke lacrosse players.

"I was charged, convicted and sent to prison in 17 months...I think that's a record!" said Santana. "I wasn't given any type of chances. I was sent to the worst prisons. I had to sit in meetings listening to the stories of real sexual predators. Even to my friends I was 'Raymond Santana from the Central Park case.' I was a child abandoned by everyone, even my family.