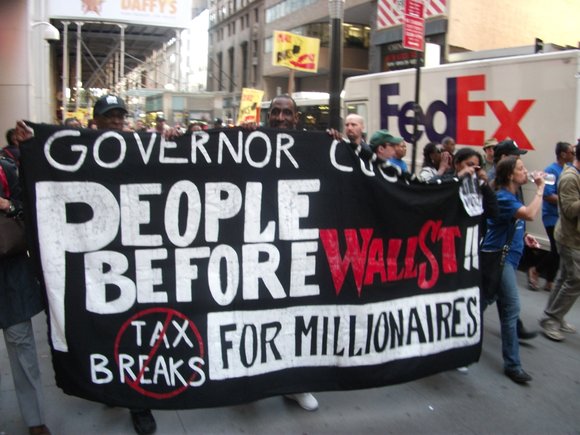 Last week thousands of teachers, social workers, activists and a diverse group of union supporters took to the streets to protest Mayor Michael Bloomberg's planned education budget cuts. The Rev. Al Sharpton, Hazel Dukes, Michael Muldrow and various members of the New York City Council held down the front line as protesters called out Wall Street for its part in creating the need for budget cuts. Organizers of the march asked participants to call the mayor and tell him to restore city budget cuts to schools, CUNY, seniors, child care, human services, the homeless and HIV/AIDS programs.

"Mayor Bloomberg is doing things, especially in daycare, that are penny wise and pound foolish. Every dollar that he thinks he is saving today is going to cost him between seven and 17 dollars over the next ten years," stated James Matison, executive director of the Brooklyn Kindergarten Society.

Matison went on to say that the children who don't receive early childhood education are the ones who wind up in special ed and remedial classes or are truant and drop out of school. These children often become involved in the criminal justice system and there is an increase in teen pregnancy.

"We need to send a message to the mayor that the cuts he's making to services, particularly in daycare, are destructive on so many levels. He has to open his eyes and listen to what people are saying," Matison continued.

"We have a $3.2 billion surplus and that money belongs to the city. It belongs to the people of New York City. Mayor Bloomberg's policies and decisions aren't working anymore," said United Federation of Teachers President Michael Mulgrew. "We hear about shared sacrifice. It seems like the working class, middle class, the working poor and people who have the most challenging circumstances are the ones who always have to share circumstances. Enough is enough!"