Walcott on education and the Black and Brown community 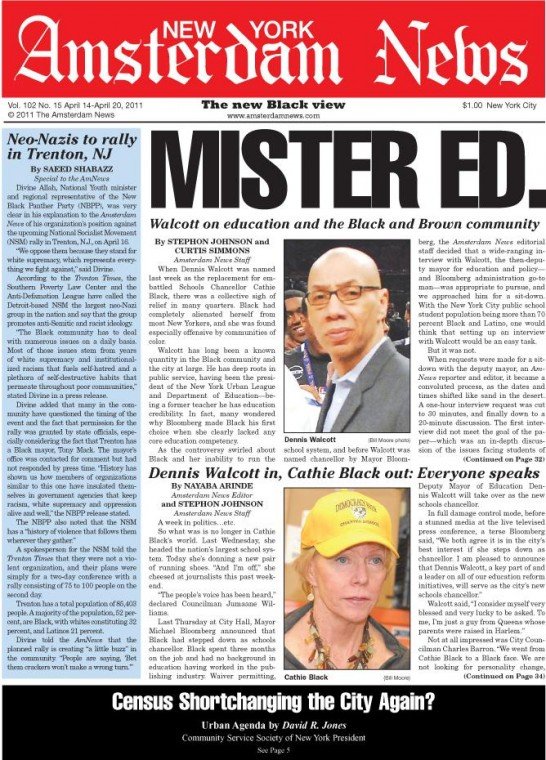 Walcott on education and the Black and Brown community

The program continues without specifically targeting the lack of Black or Latino students, but when asked by the AmNews about the current racial-ethnic breakdown of the current program, we were told that the Department of Education doesn't break down the numbers for their specialized training institute racially. Their focus is now on students who qualify for free lunch. According to numbers sent to us by Walcott's spokeswoman, there were 932 participants in the institute. Of those 932, 864 (or 93 percent of participants) took the test, and of those test takers, 357 (or 41 percent) received an offer to attend a specialized high school.

"We have increased our numbers gradually over the last several years," he said, but when the AmNews asked for specific numbers to show that increase, we received no numbers from his office by press time despite repeated requests. Walcott also identified the program Prep for Prep, which he said has identified and helped many students of color get into prestigious private schools, but he did not provide us with specific numbers.

The issue of premium schools is a particular sore spot for the Black and Latino community, since these institutions are supported as much by Black and Latino taxpayers as white and Asian taxpayers. Yet, Black and Brown children are woefully underrepresented in these institutions, which are more likely to have the best teachers and tend to be better funded by the Department of Education. There are other specialized programs in the city including the High School for Mathematics, Science and Engineering at the City College; High School of American Studies at Lehman College; Staten Island Technical High School; Queens High School for the Sciences at York College; the Brooklyn Latin School; and the Fiorello H. LaGuardia High School of Music & Art and Performing Arts, which requires a competitive performance.

Specialized schools are not the only issue of concern observers of the New York City system.

There is still a persistent achievement and graduation rate gap between Black and Brown students and their white and Asian counterparts. Walcott acknowledges this problem.

"That goes to the heart of the whole reform that we've been putting in place the past couple of years and the phasing out of those schools that have not been educating our students at a certain standard, and being extremely aggressive in the phasing out of those schools," said Walcott. "That includes schools that were high schools that were phased out, and new schools were put in place with basically the same students going there. The shrinking has started to take place as far as numbers are concerned. We have put more money into elementary schools and are working with the City Council on a middle school plan."

Walcott describes the middle school plan as a number of practices that can alleviate some of the deficits found among Black and Latino students. He said the administration sees the biggest gap in the middle school years. He acknowledged with further questioning that the gap actually starts in elementary schools.