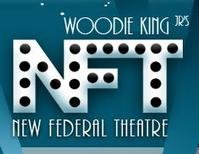 Sunday evening was an evening fit for a king-Woodie King Jr., that is, as he and the New Federal Theater (NFT) celebrated the theater company's 40th anniversary at a star-studded event at the Edison Ballroom on West 47th Street. The evening's hosts were actress Lynn Whitfield and NBC News personality Randall Pinkston.

In the past 40 years, NFT has produced 280 plays, every year presenting a full season of plays. If you have ever seen a NFT play, you know that they are the highest caliber theatrical productions you will see. NFT is also focused on African-Americans, whether as the playwrights, actors or the directors-it's an organization that takes special care to foster Black female playwrights and directors.

NFT has been a theater home and beginning for so many actors, directors, playwrights and technical theater people. S. Epatha Merkerson was one of the actors who found NFT as a theatrical home. She was a presenter for the evening, as was the incomparable Ebony Jo-Ann, who got her start in Manhattan The- ater through NFT.

The evening was a who's who of stars. One of the hon- orees of the evening was Sidney Poitier, whose award was presented by legendary actor Glynn Turman. Poitier, who was not in attendance, sent a personal video message to King in which he stated, "Woodie, you are destined to go down in history as to your creative contribution to the enhancement of the creative arts...The world has seen who you are and how you continue to enrich the world of the cre- ative arts. Congratulations." His daughter, Pamela Poitier, was there to accept the award for her father.

Poet Sonia Sanchez present- ed an award to Emmy Award- winning legendary actress and playwright, Ruby Dee. Sanchez lit up the room with amazing poetry-some of her own and some of Dee's. It was powerful and moving to hear this poetry and listen to Sanchez describe how Dee encourages people and how she became a sister and shero to so many.

Dee took the stage and started things off by saying, "I am somebody, I am somebody," and the crowd went wild. She followed that with an exciting rap to say that we are all connected to each other.

Actor Danny Glover presented an award to playwright Amiri Baraka, saying, "By pro- viding his personal experience and social concerns, he's been able to capture the total Black American experience to inspire a generation of artists."

Baraka thanked King and said, "He is the greatest producer of Black plays in the world."

Dr. Mary Schmidt Campbell presented an award to the Hon. David Dinkins, and actor Tom- my Redmond Hicks presented an award to Sylvia Sprinkle- Hamlin for the National Black Theatre Festival, which takes place every two years in Win- ston-Salem, N.C., that she and her husband, the late Larry Leon Hamlin, founded.

Actor Kene Holiday shared remarks about what NFT did for him and how it helped him to hone his craft, and actress S. Epatha Merkerson presented an award to George Faison, producer, writer, essayist, composer, director, choreographer and dancer. Pia Lindstrom presented an award to honoree Elizabeth McCann, a theatri- cal producer.