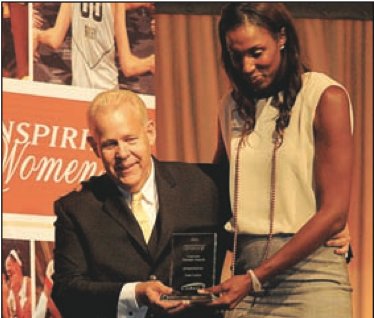 The Women's National Basketball Association (WNBA) celebrated their sixth Inspiring Women Luncheon at Gotham Hall, where they honored women who have paved the way not just for themselves, but for others as well.

Katie Couric received the WNBA Inspiration Award for her leadership in the news industry and the role she has played on behalf of cancer awareness over the years. During her acceptance speech, she said, "I have been fortunate to have the chance to interview presidents and world leaders, celebrities and authors, and even Lil Wayne, who told me, 'I'm a gangster, Miss Katie.' But despite my proximity to fame and power, I am most proud of the work I have done on behalf of cancer awareness and cancer research."

WNBA legend Lisa Leslie received the CieAura Pioneer Award for her leadership and for being a role model on the court and in the community as she inspires others to follow in her footsteps.

The BBVA Leadership of Tomorrow Award honors organizations or individuals who represents quality and characteristics of future leaders in their communities or personal or professional lives. This year's award was presented to New York Cares and volunteer Tonya Ingram for commitment to the community they serve. Ingram is a sophomore at New York University and has benefited from some of the programs she now volunteers with.

Inspiring Women Gold Standard Scholarship Awards were presented to Blanca Martinez and Ariel Roberts. They each received a scholarship in the amount of $15,000. Four young ladies from the Young Women's Leadership School in Brooklyn were also recognized. Each was introduced by a WNBA player and had the opportunity to give a brief speech regarding the best advice they ever received and who gave it.