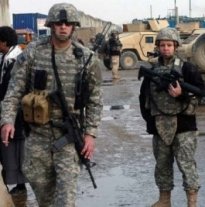 Nov. 1 (GIN) - The sounds of war are roaring throughout East Africa as the U.S. and other western countries guide deadly drones, train troops, and stockpile weapons in a build-up that had until recently been rejected by African heads of state.

Abayomi Azikiwe, editor of the Pan-African News Wire, wrote this week that a combined force of U.S. Predator drones and French naval vessels had targeted four towns in the southern region of Somalia so that Kenyan military forces on the ground could seize Kismayo, a port city under the control of Al-Shabab.

At least 4,000 Kenyan troops are fighting alongside the Somali government's troops, and fighters from the African Union, Uganda and Burundi, it was reported.

Firm African opposition to a U.S. military presence on the continent appears to have softened as Algeria, Burkina Faso, Chad, Mali, Mauritania, Morocco, Niger, Nigeria, Senegal and Tunisia have all opened their doors to U.S. counterterrorism training and equipment of militaries to "preclude terrorists from establishing sanctuaries," U.S. sources said.

With military strikes, however, come deadly errors such as this week's aerial bombardment of a camp in Somalia for displaced persons. Kenyan planes seeking to hit the base of the al-Shabab insurgents, strafed the camp, wounding 52 including 31 children, many with shrapnel, according to the relief group Doctors Without Borders.

The strikes have increased the angry threats by the Al-Shabab movement which vowed to avenge the deaths of civilians. "Kenya has brutally massacred civilians already displaced by hardship...We will ensure that Kenya mourns more than we did," said regional official Sheikh Abukar Ali Ada. w/pix of U.S. troops in Somalia