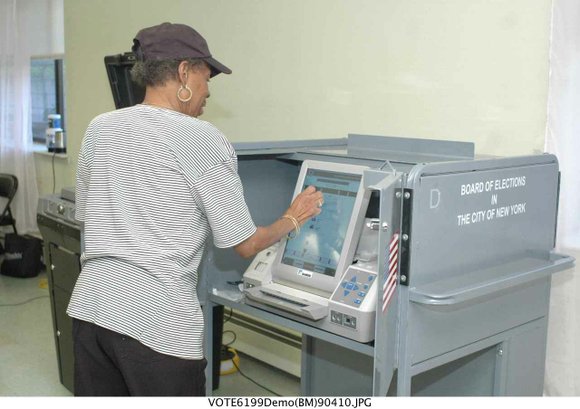 A great part of President Barack Obama's ability to win his historic election in 2008 was his ability to mobilize Black and Latino voters as well as the youth vote.

But since that historic election, under the guise of supposed voter fraud, Republican-controlled states with large African-American or Latino voters have been putting up a series of barriers to suppress the minority vote. One such means has been requiring driver's licenses or other so called "official documentation" as identification.

And a recent study by the Brennan Center for Justice, a nonpartisan policy and law institute at New York University's School of Law, found that nearly 25 percent of Black Americans lack the proper identification to vote in elections.

In its executive summary, the study states that after breaking down several barriers to allow full participation in the electoral process, several states are rolling back the gains made over the years.

State governments across the country have enacted an array of new laws making it harder to register or to vote, the summary claims. Some states require voters to show government-issued photo identification, a type that as many as one in 10 voters do not have. Other states have cut back on early voting, a hugely popular innovation used by millions of Americans.

The summary also says that two states have reversed earlier reforms that allowed disenfranchised people with past convictions, disproportionately African-American males, to vote. Another suppression tactic the report mentioned was making the registration process more difficult in various states so people could not go to the polls on election day.

According to the study, of the 12 likely battleground states (as assessed by an August Los Angeles Times poling analysis done by the Gallup organization), five states have cut back on voting rights and two others are working on new restrictions. These new laws could make it harder for over 5 million eligible voters to take part in the 2012 elections.

The states that have already cut back voting rights contain 63 percent (171) of the 270 electoral votes needed to win the presidential election.

"These new restrictions fall most heavily on young, minority and low-income voters, as well as on voters with disabilities," the study said. "This wave of changes may sharply tilt the political terrain for the 2012 election."

Earlier this year, Alabama passed a law making it mandatory for state citizens to show photo identification at the polls before voting. Illinois and Texas have passed similar laws. Ohio's State Senate tried to push through a similar bill this year, but it went nowhere.

The Alabama law has found one surprising public supporter: former congressman, failed gubernatorial candidate and nominal Obama ally Artur Davis. In an editorial for the Montgomery Advertiser, he said that there's been widespread voter fraud in the state's Black communities.

"The truth is that the most aggressive contemporary voter suppression in the African-American community, at least in Alabama, is the wholesale manufacture of ballots at the polls and absentee [ballots] in parts of the Black Belt," he wrote. "Voting the names of the dead, the nonexistent and the too mentally impaired to function cancels out the votes of citizens who are exercising their rights-that's suppression by any light.

"If you doubt it exists, I don't," he continued. "I've heard the peddlers of these ballots brag about it, I've been asked to provide the funds for it and I am confident it has changed at least a few close local election results."

Davis didn't provide specific examples of voter fraud in the editorial or to the news websites Talking Points Memo and Slate when asked to do so.

On the other side of the equation are activists ready to fight these laws. Members of the Congressional Black Caucus (CBC) plan on touring the country to point out and address what they feel are voter suppression tactics by conservatives.

"We want to make sure the issue is widely known," wrote CBC Chair Emanuel Cleaver on the political website Politic365.

"The most important thing is to expose the American public to the dangers of trying to intentionally or unintentionally pushing people away from the ballot box. Just as we were successful in obtaining a front-row seat for urban joblessness during our tour this summer, we think we can and will do the same thing regarding voter suppression."