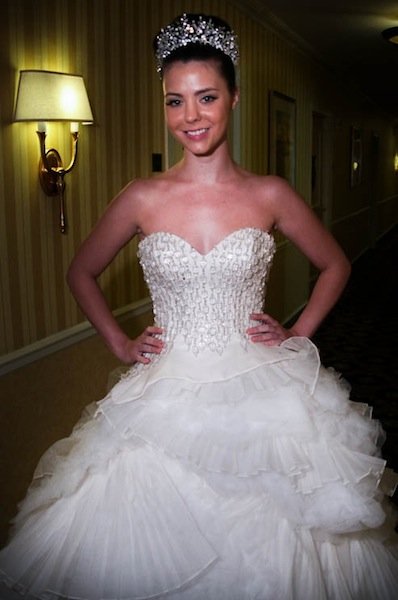 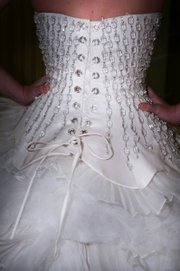 At New York's Bridal Week couture previews, designer Karan Sabag's bridal collection, shown at the Intercontinental Barkley Hotel, was opulent. "I have been dreaming of bridal gowns since I was a teenager. This collection is dreamy," said Sabag.

The collection is for every woman. Sabag said she wanted a collection that would be accessible to every figure type.

As always, Sabag has utilized the finest fabrics. Many of the gowns are made of 100 percent Italian or French Solstice lace. They are enhanced with intricately worked details, including crochet, embroidery and fine hand-beaded embellishments. Many of the creations are adorned with Swarovski crystals and pearls, while some are intertwined with metallic silver or gold threads.

In 2007, Sabag won the prestigious first prize in the Kleinfeld-FIT Bridal Contest, competing against 800 applicants.

She also won Best in Show at the Supima Fashion Competition for emerging designers in 2009. Her winning design, a wedding gown made of Albini shirting, was exquisite. The fabric company was so impressed that they have since taken the gown to Milan and Paris to exhibit at fabric shows.

Sabag has an impeccable eye for detail. Her signature work shows in her bridal gown corsetry. On the gowns, her handworked corsets add a glamorous, sultry component to a woman's body. There's a fit emphasis in all the right places.

Sabag was born in Israel, and her family moved to New York when she was 11 years old. A graduate of FIT, her mother was in the fashion business, which led her to start her own business at an early age. In fact, her bridal business started before she graduated.

Sabag's collections are often featured at the Mercedes-Benz Fashion Week shows and she owns an atelier on Ocean Parkway in Brooklyn.