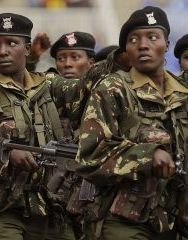 Nov. 8 (GIN) - Western countries and African neighbors have stepped up their military excursions into Somalia, raising the prospect of a nation split into zones of influence by the respective forces.

One country planning a bite of the Somali apple is Kenya which would like to slice off a "buffer zone" to be called Jubaland. A puppet government would control resources and facilities, starting with Kismayo, a port used by smuggling networks with Kenyan links, according to a UN report published in July.

But Kenyan, U.S., French, and other foreign raids on Somali soil have brought new threats of retaliation. "...We must unite and fight back until we clear our territory," a leader of the Islamist movement, Sheikh Hassan Abdulahi Hersi, said recently in a voice recording on Radio al-Furqaan, a station that backs al-Shabab. "The Kenyan government will lose many people and assets because of its intervention in our territory."

In a related development, the U.S. army is providing counter-insurgency training to Nigerian troops to combat the rising number of attacks by Boko Haram, a Muslim sect fighting western influence in the primarily Muslim North. A rights activist warned that "a state of armed Islamist insurgency" is likely to spread.

The group's official name is Jama'atu Ahlis Sunna Lidda'awati wal-Jihad, which in Arabic means, "People Committed to the Propagation of the Prophet's Teachings and Jihad". But Hausa-speaking residents in the city of Maiduguri, the group's spiritual home, call it Boko Haram, usually translated as "Western education is forbidden/ sinful".

Activist Shehu Sani, president of Civil Rights Congress of Nigeria, said he tried to broker a ceasefire between Boko Haram and the government two months ago, but the talks collapsed when one of the hosts was killed. "Boko Haram blamed the security forces," he said.

While military force is the power of choice, violence brings only new violence. For now it is most likely Boko Haram will expand their operations to other parts of Nigeria to make a point and prove they are really on the ground, rights activist Shehu Sani said.