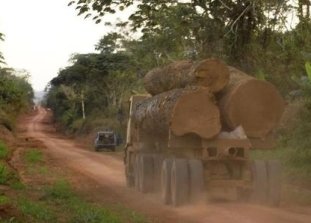 Nov. 8 (GIN) - Swiss loggers in the timber-rich forests of Bosanga, the Democratic Republic of the Congo (DRC), turned their trucks on villagers who were attempting to enforce a "social responsibility agreement" signed with their village chief, according to a recent blogpost by the activist group Greenpeace.

According to Greenpeace Africa, the Swiss-company Danzer, backed up by local military and police, burned and crushed homes in a brutal spasm of violence that left one person dead, women violated and over a dozen jailed last spring. The Yalisika villagers were demanding that the company provide what it had promised, namely a school and a health facility. Danzer never delivered on this promise but they continued stripping the forests, Greenpeace said. In 2008, Danzer was accused of massive tax fraud for smuggling timber revenue out of Africa to avoid paying taxes. The company has denied all charges.

Danzer makes decorative hardwood veneer and is a major producer and trader of hardwood timber. They began logging in the Congo in 1993 but signed a pact with traditional chiefs only in 2005. A film on the impact of logging in the DRC - "We are People Already Sold" - can be viewed at www.globalwitness.org or YouTube.

Greenpeace Africa also this month held an action in South Africa where one of the world's biggest coal-fired power plants is being built. Chaining themselves to the Kusile plant's front gate, protestors held banners saying "Green Jobs Now" and "No Future in Coal".

Activist Michael Baillie wrote: "South Africa is already the 12th largest CO2 emitter in the world, and the biggest in Africa. The Kusile plan is not the way to reduce our very real impact on this continent and the African people who live here."

The Greenpeace report: "The True Cost of Coal in South Africa" is available online.