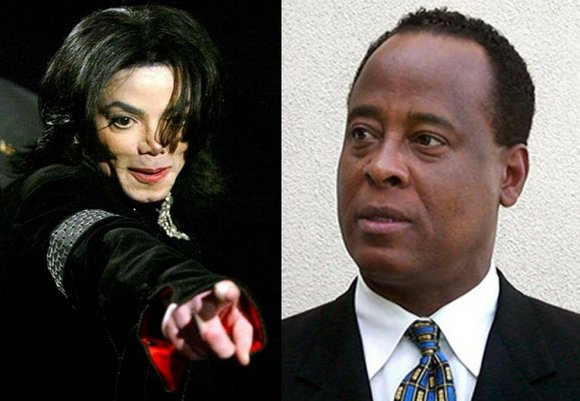 Members of Michael Jackson's family filed out of the courthouse in downtown Los Angeles following this week's guilty verdict in the trial of Dr. Conrad Murray, who was convicted of involuntary manslaughter in Jackson's death.

As the family members made their way to waiting cars, HLN's Jane Velez Mitchell was able to nab quick quotes from Jermaine, La Toya and Rebbie Jackson (whose daughter, Yashi Brown, screamed inside the courtroom when Murray was pronounced guilty).

Jermaine Jackson said, "Justice was served. It wasn't enough time, though. Michael is with us."

Rebbie Jackson said, "I'm just so happy it's over with. Nothing will bring him back, but I'm happy [Dr. Murray] was found guilty."

La Toya Jackson said, "Thank you, America. Thank you, all the fans, thank you, the prosecuting team-Walgren, you were great. Everybody was wonderful. I just want to thank you. Michael loves everybody out here, I love him, we all love him. And guess what, he was in that courtroom, and that's why victory was served."

When Brown was asked to comment on the guilty verdict, she smiled and said one word: "Handcuffs."

Also commenting on the verdict was Paris Hilton's mother, Kathy Hilton, a longtime Jackson family friend who grew up in the same neighborhood as the famous siblings. Hilton said she's "thrilled" that justice was served, "but still, Mr. and Mrs. Jackson and their family are leaving today without their son."

Let's hope that Murray receives at least four years in prison for his horrible manslaughter of the late, great superstar, Michael Jackson. May he rest in eternal peace.

Here's wishing you, your family and friends a fantastic week ahead.