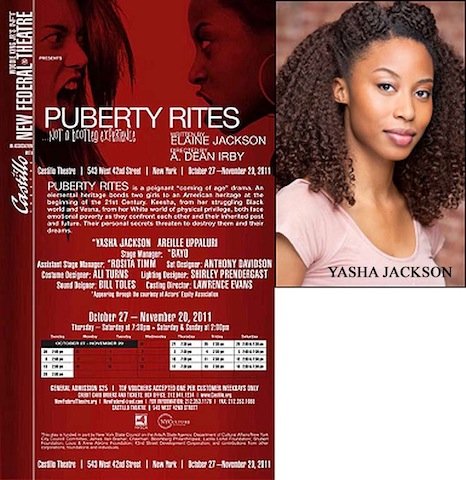 'Puberty Rites' in its last week

Starring Yasha Jackson and Arielle Uppaluri, "Puberty Rites" is a poignant coming-of-age drama. An elemental heritage bonds two girls to an American heritage at the beginning of the 21st century. Keesha, from her struggling Black world, and Vesna, from her white world of physical privilege, both face emotional poverty as they confront each other and their inherited past and future. Their personal secrets threaten to destroy them and their dreams.

Keesha Black (Jackson) is a thin, wiry, slightly hyper, confrontational 17-year-old. Brilliantly knowledgeable, she speaks fluent "'hood speak" intermingled with precise King's English. She has complete command of both languages and looks younger than her 17 years.

Vesna White (Uppaluri), 18 years old, is a tall, blond, fierce third-generation ethnic Albanian. Although rich, an extremely dysfunctional family life has left her disdainful of her wealthy heritage and devoid of any personal security.

Vesna is found attempting suicide in Keesha's backyard. The two young women, whose lives are so remotely connected, become instant adversaries and are prepared to claim their territory and rights with the ferocity of wolves in the wild. They seemingly have nothing in common except for the magnet high school they both attend, which has been transformed to attract students from "the Hills" to the previously all-Black school.

Keesha, whose balcony in the Boca Raton Plaza apartments overhangs the school parking lot that she calls her backyard, and Vesna, from "the Hills," whose father is a major architect, eventually realize a common bond so complete and profound that they are united and joined as equals for one brief moment in time and space.

Make sure you order your tickets now. Don't miss "Puberty Rites," it's a sensational play.