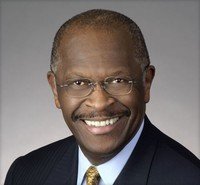 Who is Herman Cain? 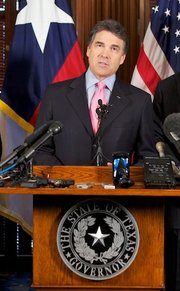 Each day seems to bring new drama to the presidential GOP race, and nothing typifies this tumult more than the ascendancy of Herman Cain and the decline of Gov. Rick Perry. Add to this the heavy breathing from New Jersey's big man, Chris Christie.

Recent straw polls indicated the topsy-turvy ranking of candidates, with Michele Bachmann taking one in Iowa, Mitt Romney in Michigan and Cain in Florida.

Perry's fortunes appeared to decline in each of these polls, and his descent most recently is even more precipitous following poor showings in the debates and his family's association with a hunting camp with the N-word as part of its title and location.

In response to the disclosure, Perry told the press that the term "Niggerhead" was an "offensive name that has no place in the modern world."

Already facing severe desertions in his ranks, this bit of news should all but end his bid, if not seriously impair it.

Meanwhile, Cain is taking full advantage of Perry's perils, stating on ABC's "This Week," "I think that it shows a lack of sensitivity for a long time of not taking that word off of that rock and renaming the place."

Rather than castigating Perry, right-wing elements have aimed their criticism at Cain. "It also seems to be a slander Herman Cain is picking up and running with as a way to get into second place," charged a writer for RedState, a conservative blog.

Cain, a businessman from Georgia, had already zoomed into second place before Perry's slip. A recent ABC/Washington Post poll shows Cain tied with Perry at 17 percent, with Romney setting the pace at 23 percent.

Matt Lewis of the Daily Caller said Cain's comments were a "cheap shot and, perhaps, a signal that Cain is willing to play the race card against a fellow Republican when it benefits him."

Meanwhile, Cain is also taking heat from the left.

Democratic strategist Cornell Belcher, appearing on CNN's "Anderson Cooper 360," said that Cain's comments about Black voters being brainwashed were racist. "If I came on your show, Anderson, and I said all Jewish people are brainwashed, I probably wouldn't be invited back to CNN, and I assure you the condemnation would be swift and it'd be powerful and strong."

However, Cain is Black, so how can he be called a racist when assailing Black people? If a Jew were to appear and say that all Jews were brainwashed, he might be consider a self-hating Jew, not a racist.

And by suggesting that Black Americans are brainwashed, Cain joins such illustrious company as Malcolm X, who made similar comments during his speeches, and Tom Burrell, the advertising pioneer and author of "Brainwashed."

Anyway, the beat goes on for Cain, and whether from the left or the right wing, his popularity continues to rise.

Even so, the 800-pound gorilla in the GOP room is Christie. The nation waits to see if he'll enter the race, though he continues to say he is not a candidate.