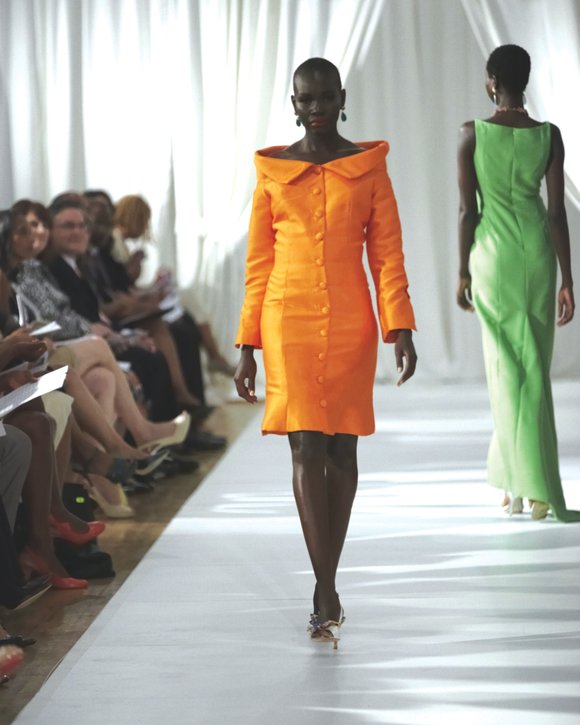 For spring/summer 2011, b michael used his show at the American Museum of Natural History to salute the great work of the New York City Mission Society. Sponsored by Morgan Stanley Smith Barney, the show was inspired by color-and lots of it.

The New York Mission Society is an organization that has supported children and families for over 198 years. They encourage resiliency in the face of many changes, self-confidence and the ability to make positive life choices. Their core values include respect for people served, and they encourage youth to explore their individuality in a safe and nurturing environment and see possibilities where others see limitations.

Michael brings haute couture designs and a high-fashion feeling to the Mercedes-Benz Fashion Week shows. His look is modern glamour. From the moment the first model stepped on the runway, the audience was mesmerized by michael's color, attention to detail-such as draping, zipper placements and sleeve treatments-and shapes.

For day, dresses are tapered, with hemlines to the knees. Suit jackets are shorter and fitted at the waist. Form-fitting sheath dresses with cowl and boat necklines and low backs are simply styled yet classically cut.

Evening looks are simply stunning. Several models looked like they stepped out of a vintage Vogue magazine. Colors are vibrant. There are clever combinations of colors, too.

Fabrics are luxurious. The models in the show stopped halfway down the runway, struck a pose, turned and continued down the runway. In other shows, the models are walking fast and they only stop at the end of the runway in front of the photographers. This a nice touch, making it feel much like a Paris show.

In the '70s and '80s, top models like Mounia, Beth Ann Hardison, Toukie Smith, Naomi Sims, Alva Chin, Pat Cleveland and Norma Jean Darden knew how to work the garment. The models in b michael's show reminded editors of some shows gone by. It's all about style. Michael's haute hats are fabulous and received applause.