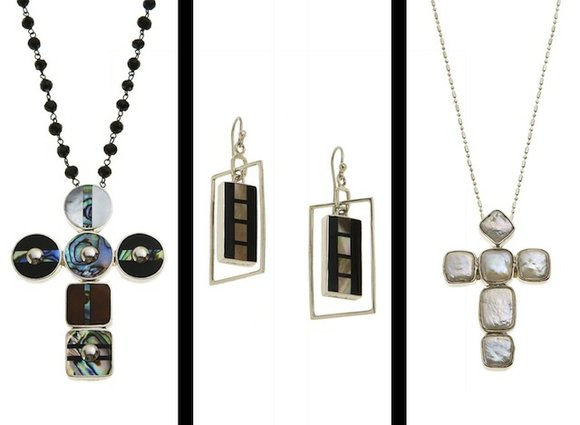 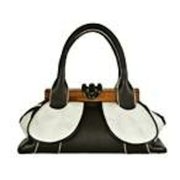 In business for over 30 years, this season Baker introduces a new, distinctive collection of one-of-a-kind crosses. These exceptional pieces will be showcased Nov. 19 and 20 at the Studio Museum in Harlem, along with her newest earring, necklace, bracelet and cufflink designs.
Baker's trademark style brings together an eclectic range of rich organic elements with clean modern lines that are set in sterling. Her bold crosses are on the cutting edge. Baker is known for her flair for marrying artistry and elegance. For this collection, her inspiration was her organic inlaid mosaic designs, which she used to create these memorable collectible pieces. Her signature appears on the back of each cross.
Baker's love of world cultures inspires her work. She also works with nontraditional combinations of materials, including South Seas abalone, freshwater pearls, non-endangered sponge coral and horn. The crosses hang from sparkling, long strands of faceted spinel or sterling silver chains.
"My approach to design has always been about finding the balance between where form meets function. It's where true art lies," explained Baker. "When a man or woman wears one of these crosses, I want them to feel their heart and soul is making spiritual connection as they are wearing one of life's small luxuries."
Over the years, Baker has carved a distinctive niche in all corners of the globe. Her work is available in better gift shops, galleries and museum stores and at www.sandybakerjewelry.com.
On the second floor of Henri Bendel, now located at 712 Fifth Ave., you are invited to join Jacques Fath's head designer, Laurence Dumenil, for a look at the fall/winter collection.
In the prime of his career over 50 years ago, Jacques Fath's couture gowns were carried at Bendel. The store is now proud to welcome designs from the house of Jacques Fath into its new townhouse on Fifth Avenue. Women have been looking to Bendel's since 1895 to find the latest it bag on their arm-well, here it is, designed by Jacques Fath.
Fath established the House of Fath in Paris in 1937. He is considered one of the three most influential postwar French fashion designers, along with contemporaries Christian Dior and Pierre Balmain. Due to Fath's eccentric personality, taste for decadence and attention to detail, he was branded the "Little Prince of Paris Haute Couture." The House of Fath closed in 1957 following the couturier's untimely death.
Today, after more than 50 years, the innovative designs of Fath are breathing new life under the direction of head accessory designer Dumenil. A stunning collection of handbags and clutches is now making its debut in the American market.
Dumenil has updated the vintage Jacques Fath aesthetic with her edgy, modern and fresh approach to details. Handmade in a family-owned factory in Angers, France, the collection features rich embossed leathers, lizard and python skins, wooden closures and jeweled clasps.
A new generation of fashionable celebrities has discovered the alluring designs of Jacque Fath; Sienna Miller was recently spotted carrying the Fidelity clutch to the British Fashion Awards in London.
The Fidelity is among the gorgeous array of handbags you will find at Henri Bendel from Oct. 28 to 30.